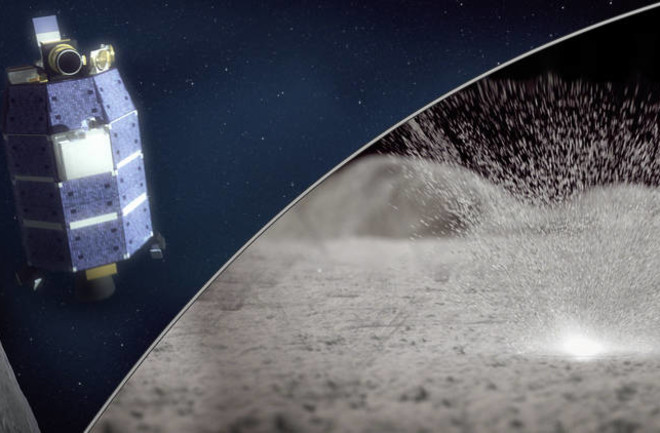 NASA's LADEE spacecraft saw water thrown off the moon's surface after meteor impacts. (Credit: NASA/Goddard/Conceptual Image Lab) When NASA astronauts first landed on the moon in 1969, they saw a desiccated world, bone-dry and devoid of any life-giving water. The Apollo astronauts, planning to stay only a few days, had brought plenty of water for their own needs. So this finding was disappointing for the hazy plans of future lunar outposts, but not immediately concerning. Decades later, humans have learned that the only economical way to explore space longterm is to use the resources we find along the way. And luckily, we’ve also now discovered that the moon, far from being a waterless rock, is in fact simply hiding water beneath its surface. Multiple missions have revealed this precious substance by excavating (read: blowing up) the moon’s surface layers, or by using scanning instruments to find the tell-tale hydrogen and oxygen signatures. But new research, published April 15 in Nature Geoscience, reveals that this water is being lost to space every time the moon gets hit with a meteor. That means the water is sitting not far beneath the surface. The authors on this latest research, led by Mehdi Benna from the NASA Goddard Space Flight Center, used data from NASA’s Lunar Atmosphere and Dust Environment Explorer (LADEE), which orbited the moon from October 2013 until April 2014.

They found that water spiked in the thin lunar atmosphere at the same times the moon found itself being pummeled by meteor streams. The idea that the moon releases water when objects hit it is something humans have known since the first time an Indian spacecraft named Chandrayaan-1 sent a probe hurtling into the moon’s surface, kicking up a lot of dust and a surprising amount of water. The 33 watery episodes that scientists spied via LADEE yield more detail, especially as they were spread across large swathes of the lunar surface. Based on the size of the meteor shower and the amount of water released, they were able to calculate that the top 3 inches of the moon’s soil is dried out, mostly from being baked during hot lunar days. But beneath this thin layer, the moon is covered in water fairly evenly. That's not to say the moon is soggy beneath the surface. The moon remains a dry environment. Much of the water excavated during these meteor showers is lost to space, meaning the moon is steadily losing the water it does have. But the fact that our 4.5-billion-year-old moon still has water to lose is a good sign for those looking forward to lunar settlements – something NASA has its eye on in the near future. NASA explains more about LADEE's discovery in the video below. [embed]https://www.youtube.com/watch?v=wZxUyH7vuRk[/embed]