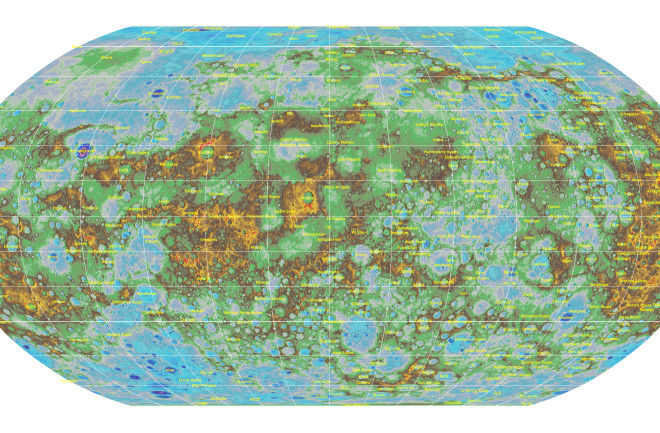 The full topographic map of Mercury with labeled features. (Credit:USGS) When Mercury glides across the face of the sun Monday, you’re not going to see much more than a speck — if you have the right equipment. But thanks to NASA’s MESSENGER, we can see the planet’s peaks, valleys and pockmarks in unprecedented detail. On Friday, the Planetary Data System released the first global elevation model of Mercury’s surface, giving scientists an opportunity dive deeper into the planet’s geologic history.

MESSENGER’s operations ended just over a year ago when the spacecraft smashed into Mercury’s surface at a blazing speed of 8,750 mph, bringing the 4-year mission to a smoldering end. MESSENGER collected terabytes of data that scientists have been parsing since the craft met its end, and Friday’s release is the 15^th and final major data dump from that mission.

Mercury’s northern volcanic plains shown colorized to emphasize different types of rocks on Mercury’s surface. (NASA/Johns Hopkins University Applied Physics Laboratory/Carnegie Institution of Washington) The new model reveals the highest and lowest points on the planet, and fills in the last missing pieces of Mercury’s topography. In addition to the global model, scientists also have a crisp new view of Mercury’s volcanic north pole. This colorful map, enhanced to emphasize different types of rocks, will help scientists understand the volcanic activity that shaped Mercury’s surface. MESSENGER was the first spacecraft to orbit Mercury, and logged two flybys of Venus on its way to the solar system’s innermost planet. It was launched in 2004, and arrived at Mercury in 2011.