Messenger Spacecraft Is Closing in on Mercury Crash-Landing 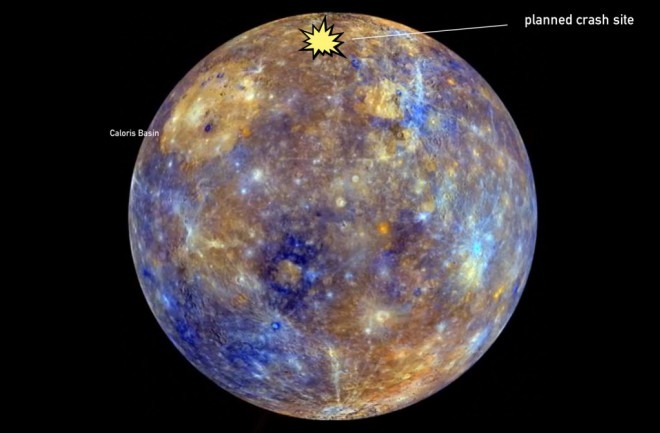 This false-color image of Mercury shows the planned crash site as reported by the NYTimes. Credit: NASA/Johns Hopkins University Applied Physics Laboratory/Carnegie Institution of Washington Today, humanity will make a permanent blemish on the surface of Mercury, with a planned spacecraft impact on the planet. In 2011, NASA’s Messenger probe became the first spacecraft to enter Mercury’s orbit, and it has collected troves of data and photos of the innermost member of our solar system. But the time has come to say goodbye. At 3:26 EDT Thursday, Messenger will slam into the surface of Mercury and leave behind a crater that’s 52 feet in diameter as its lasting legacy.

Messenger’s death is no surprise to NASA scientists. They knew that on Thursday, the spacecraft would run out of propellant and succumb to the tug of Mercury’s gravity. When the now 1,100-pound craft (it shed 1,320 pounds burning its fuel) slams into an impact basin dubbed “Shakespeare,” it will be traveling roughly 8,700 miles per hour. As it accelerates toward its demise, though, the spacecraft has still been dutifully sending back photos, including this one taken yesterday:

One of the last images taken by the Messenger spacecraft. Credit: NASA/Johns Hopkins University Applied Physics Laboratory/Carnegie Institution of Washington But Messenger’s death will certainly not be in vain. It has snapped more than 270,000 photographs of Mercury, mapped its entire surface and deepened our understanding of not only the hot planet’s evolutionary history, but of our entire solar system. Messenger was equipped with seven scientific instruments, including an array of spectrometers, a dual imaging system and laser altimeter that operated in an extremely brutal environment — the probe was exposed to 11 times more sunlight than it would’ve been if it orbited Earth. The instruments were mounted so that they would be in view of Mercury but not the Sun in order to withstand an onslaught of heat and radiation. Messenger utilized a parasol to block the Sun’s heat; the front of the shade reached temperatures of 700 degrees Fahrenheit, but behind the shade it was a comfortable 70 degrees.

One of the most important things we now know thanks to Messenger is that Mercury is abundant in volatile elements, which ruled out many of the competing theories regarding its formation and early history. Previously, scientists thought Mercury was far too hot for these elements to stick around. But volatiles like chlorine, sulfur and potassium evaporate at moderate temperatures, which means scientists needed to rethink how Mercury — and the rest of the solar system’s bodies — formed.

A combination image by NASA from the Mercury Atmosphere and Surface Composition Spectrometer (MASCS) instrument aboard NASA's Messenger, released April 16. Credit: NASA/Johns Hopkins University Applied Physics) Laboratory/Carnegie Institution of Washington Messenger also found evidence that frozen water is present in permanently shadowed craters that are located in Mercury’s polar regions. The ice is either present on the surface, or just centimeters below. You can check out the rest of Messenger’s greatest hits as compiled by NASA. And, lest we forget, Messenger also took thousands of photos and completely mapped Mercury’s surface. A European and Japanese joint venture called BepiColombo will serve as Messenger’s successor, and another spacecraft is planned to launch in 2017 and arrive at Mercury in 2024. All in all, Messenger was a “fantastic” mission says Johannes Benkhoff, project scientist for BepiColombo at the European Space Agency. So from everyone here on Earth: Thank you Messenger, and godspeed.