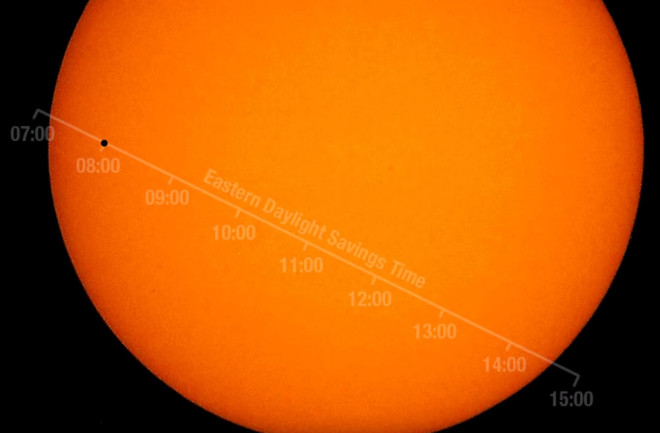 Where and when you can expect to see Mercury as it crosses the face of the sun Monday. (Credit: NASA) On Monday morning, Mercury will pass across the face of the sun — a spectacle that occurs just 13 or 14 times every century. Starting at 7:12 a.m. Eastern time, the solar system’s smallest planet will begin its more than 7-hour jog across the disk of the sun. With the right viewing equipment, Mercury will appear as a speck gliding across the sun’s face. The last time the planet transited the sun was in November 2006, and it won’t happen again until November 2019. It goes without saying, but we’ll say it anyway, do not attempt to witness the transit by staring at the sun — you wouldn’t see much anyway. You’ll need a telescope with a powerful solar filter to witness the transit. Mercury is too small, and the sun is too big and bright, to see unaided. But if you want to catch part of the show, and you lack proper viewing equipment, you can tune into Slooh’s special webcast (below) throughout the day.

Scientists aren’t going to let Monday’s opportunity go to waste. As the planet passes in front of the sun, NASA researchers can learn about Mercury by measuring the way gases absorb sunlight in its exosphere. Scientists will also be observing the event in immaculate detail using NASA’s powerful Solar Dynamics Observatory. You can even keep tabs on a near-live feed of SDO images on Monday.

Discover photo editor and astrophotographer Ernie Mastroianni will be in Boston capturing images — weather permitting — of the transit.