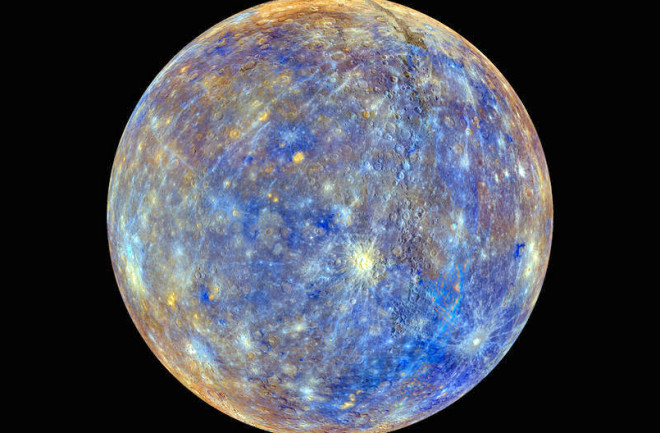 An image of Mercury via the MESSENGER spacecraft. This false-color image is enhanced to show the chemical, mineralogical and physical differences between the rocks that make up Mercury’s surface. (Credit: NASA/Johns Hopkins University Applied Physics Laboratory/Carnegie Institution of Washington)

For such a tiny planet, Mercury is a pretty big puzzle for researchers. NASA’s MESSENGER probe already has revealed that the planet is surprisingly rich in elements that easily evaporate from the surface, such as sulphur, chlorine, sodium and potassium. This is incredibly odd as these kind of substances most likely would disappear during a hot or violent birth – exactly the type of birth a planet so close to the sun, such as Mercury, would have had.

Scientists are also struggling to understand why Mercury is so dark and what its earliest planetary crust, created as the newly-formed planet cooled down, was made of. Research has now started to throw up answers – but these are raising a lot of new questions.

In Search of the Oldest Crust

Look at the moon and you’ll see dark lava flows that have been erupted over the brighter-looking terrain of the lunar highlands. The highlands are the moon’s oldest crust and were formed from a pile up of crystals called anorthite, which rose to the top of the global magma ocean that covered the moon in the aftermath of its violent birth.

But if you look at Mercury as seen during during MESSENGER’s 2011-2015 orbital campaign you’ll see no such thing. Mercury is dark everywhere. Its crust is mostly a series of giant lava sheets – and the older ones have been around long enough to be scarred by a large number of impact craters created by comets and asteroids bombarding the surface.

A 2,000-kilometer-wide area of Mercury. Unlike the Moon, it is all dark. (Credit: NASA/Johns Hopkins University Applied Physics Laboratory/Carnegie Institution of Washington/Quickmap)

All those lava sheets must have been erupted on top of something – so where is Mercury’s oldest crust, and what was it made of? This is a problem that Mercury scientists have been grappling with since MESSENGER made its first flyby in 2008. They identified some particularly dark patches, dubbed “low reflectance material”, which apparently have been dug up to the surface as comets and asteroids hit it. But they could not work out what makes this material so dark, especially as MESSENGER proved that Mercury’s surface is remarkably poor in iron, which could have darkened it.

However, it turns out that a lack of iron would make Mercury’s original magma ocean less dense than the moon’s, so that any anorthite crystals that grew would sink rather than float upward to produce bright spots. In fact, the only mineral likely to crystallize that would have been able to float is graphite, the soft, dark form of carbon used in pencil “lead”.

A graphite crust on Mercury used to seem unlikely, especially if you assume that its carbon content is similar to that of Earth or Mars. But now research suggests that this crust was indeed made largely out of graphite. That is strange because the other rocky planets have a lot less carbon on their surfaces, and carbonaceous asteroids from which a carbon-rich planet could form are much further from the sun than Mercury’s present orbit.

The study analyzed data collected by MESSENGER when the spacecraft was within 100 kilometers of the surface. It showed that while the dark patches did contain graphite, it was far from being pure – more like ordinary rock debris with a few percent of graphite mixed into it.

So, we still have not found any of Mercury’s primary crust exposed at the surface in an intact state, though we may have found the next best thing: the impact-pummelled surface of the original crust, dug out by later impacts. The original crust was overprinted by successive episodes of volcanism. There are also clear traces of much more recent “hollows” where the surface has been eaten away by some process that removed solid volatile substances – such as sulfur, chlorine, sodium and potassium – as vapor.

A 280-kilometer-wide view with an explosive volcanic vent just to the right of center. The vent is surrounded by a pale, yellowish deposit that was erupted from it. (Credit: NASA/JHUAPL/Carnegie Institute Washington)

Most hollows are on or close to patches of low-reflectance material, so the primary crust itself could have been rich in these unlikely volatiles originally.

Scarlatti crater on Mercury. This exposes low reflectance material to the south of its peak-ring. The inset on the right, an area less than 5 kilometers across, shows hollows forming there. (Credit: NASA/Johns Hopkins University Applied Physics Laboratory/Carnegie Institution of Washington)

MESSENGER returned enough data to keep scientists busy for years to come, but to learn more about the crust and to work out exactly why the planet is so rich in strange elements we will probably have to await the arrival of the European Space Agency’s BepiColombo mission to Mercury in 2024.

Meanwhile, people across most of the globe will have an excellent chance to see Mercury for themselves when it crosses the face of the sun (a “solar transit”) on May 9, 2016.