Discovery could help explain where the biggest ones come from. 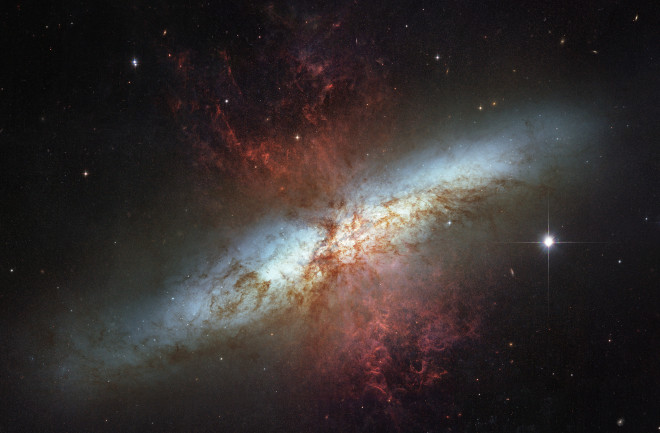 After decades of searching, astronomers have finally found a medium-size black hole. About 12 million light-years distant in galaxy M82, middleweight M82 X-1 is bigger than the black holes left over from stars’ deaths, but it’s not big enough to be supermassive.

Astronomers had long thought such in-betweeners might exist and believed they might be catching glimpses of them, but they had no solid proof. University of Maryland’s Dheeraj Pasham set out to change that. While no one can see a black hole by definition, an X-ray telescope can see the orbiting material around that black hole, which is so hot it emits high-energy radiation.

Pasham studied six years’ worth of X-ray data from M82 X-1. He found two repeating signals. The time between blasts gives clues about how fast and how far the orbiting gas is from the hole’s center — in other words, whether the black hole has small, medium or large gravitational force. Pasham ran the numbers: M82 X-1 is about 400 times as massive as the sun. It is the first time an astronomer confirmed a black hole that is definitely “intermediate mass.”

So where did it come from? Nobody knows. “Its formation requires a new astrophysical phenomenon,” says Pasham; several theoretical models exist that could explain it, but none has been proven to be accurate. But these medium black holes might just be the seeds that grow into the supermassive ones. Their existence alone, whatever the origin, could explain how their gargantuan cousins got here. To know for sure, astronomers will have to keep finding these cosmic rarities.