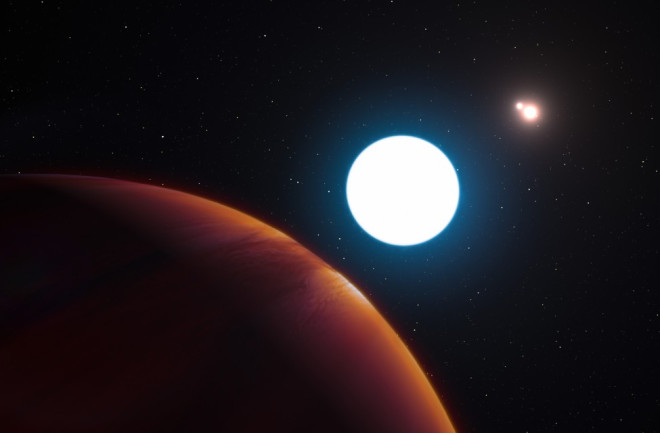 This artist's impression shows a view of the triple star system HD 131399 from close to the giant planet orbiting in the system. (Credit: ESO/L. Calçada) There are plenty of weird planets in the Milky Way, but HD 131399Ab may be one of the weirdest. Discovered in a survey of 100 young stars, the 16 million-year-old planet still glows hot enough for astronomers to image it directly. Somehow in those short few million years, it migrated out 80 astronomical units (AU; one AU is the average Earth-Sun distance) from its parent star. But also accompanying the parent star, which is a little bit bigger than the Sun, are two companion stars in orbit around each other at a distance of 300 to 400 AU.

“In this case, this planet is much closer to the other stars in the system than any known exoplanets in a multi-star system,” says Kevin Robert Wagner, a graduate student at the University of Arizona and lead author of the discovery paper, published Thursday in the journal Science. Plenty of multi-star planets have been found. But few are as widely separated from their parent star as HD 131399Ab, or quite as close to the other stars in the system. For instance, while planet Fomalhaut b veers as far as 300 AU from its parent star, an accompanying binary pair of stars orbits Fomalhaut at nearly a light-year away, or more than 57,000 AU away from Fomalhaut.

The image of the HD 131399 system, with primary star A toward the top, the planet in the middle, and stars B and C in the lower right. The images were taken by the SPHERE instrument at ESO's Very Large Telescope. (Credit: ESO/K. Wagner et al.) But in the case of HD 131399Ab, the planet is essentially in our Kuiper Belt while the binary pair of stars is in the inner Oort Cloud. Wagner and colleagues are still getting a handle on the planet’s orbit. If it’s especially eccentric, that could indicate that the planet formed closer in and was flung out by an as-yet undiscovered extra planet in the system. There’s also a small chance — and Wagner is skeptical of this hypothesis — that it formed around one of the more distant binaries and migrated in toward the dominant star. “I think that it’s most likely that it formed closer to star A, just because all of these types of planets are formed around A stars,” Wagner says. But then, of course, nothing is typical in this system.

The planet is close enough at only 319 light-years away that we may be able to draw out some details of its atmosphere. Astronomers estimate it to be three to five Jupiter masses, and it may have water or methane in its atmosphere, sitting somewhere between the clear atmosphere of Jupiter and the murkier atmosphere of Saturn. Future studies could provide a bridge toward understanding planetary formation in highly unusual systems. And maybe, just maybe, we could figure out where it came from. “It seems really unlikely that it formed out there, because there's really not that much out there,” Wagner says. Captured? Flung out? Abandoned? Only time will tell.