Massive Clouds Colliding in Space Could be Birthing Huge Stars 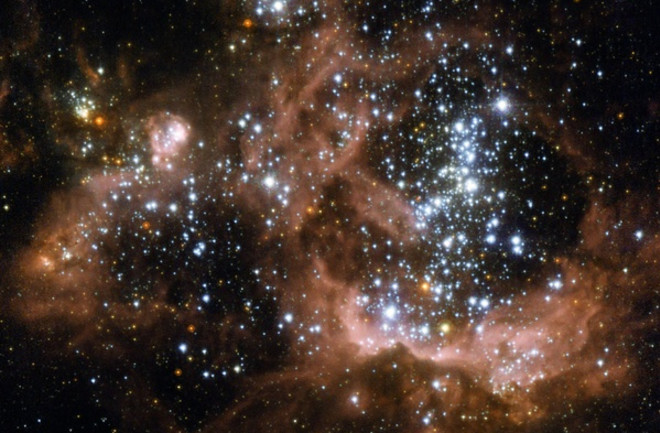 This star-forming region is one of many in M33 that’s birthing new stars from massive clouds of dust and gas. (Credit: ESA/Hubble and NASA)

Astronomers have witnessed a rare event: the birth of massive stars 2.73 million light-years away in the Triangulum Galaxy (Messier 33). At the center of two giant colliding gas clouds are some 10 young stars with masses tens of times that of the Sun. Their discovery indicates that such cloud-cloud collisions are a main pathway to creating giant stars in the nearby universe, which could help answer the long-standing question of how big stars form.

High-mass stars — those at least eight times the mass of the Sun — are the celebrities of galaxies. Although they’re relatively rare, they produce most of a galaxy’s visible light. They also strongly influence the environment around them through the radiation they release during their lifetimes and the heavy elements they scatter upon their explosive deaths. Their formation, however, remains debated.

New research submitted to the Publications of the Astronomical Society of Japan and published on the preprint site ArXiv uses the Atacama Large Millimeter/submillimeter Array to study two giant clouds in M33. The clouds are 190,000 and 240,000 times more massive than the Sun, respectively, and contain molecules such as molecular hydrogen and carbon dioxide. The two clouds collided at supersonic speeds around 500,000 years ago. (Here, “supersonic” means faster than the speed of sound in the clouds’ environment. In dense regions of space, the speed of sound can be a few miles per second or more; on Earth at sea level, the speed of sound is just over 1,100 feet [340 meters] per second).

The researchers looked specifically for signatures of carbon monoxide, which can be easily seen in radio observations, to chart the denser filamentary structures in the clouds. They also looked for a specific signature of hydrogen that indicates the presence of massive stars. At the center of the collision, they found 10 objects that appear to be young, massive stars. That makes it highly likely that the collision caused changes in the clouds’ gas that made it collapse to form the stars.

Massive stars, which are harder to form than smaller stars, aren’t seen everywhere low-mass star formation occurs. So, the question is: Why not?

Astronomers think massive star formation must require some sort of additional triggering mechanism, such as cloud-cloud collisions, strong winds blown off active stars, expanding gas heated by other massive stars or shockwaves sent out by exploding supernovae. But until recently, there was scant observational evidence supporting cloud-cloud collisions. This study, however, now bolsters that option as a way to form massive stars.

“We have a number of different ideas of how massive star formation is initiated,” says Harold Yorke, an astronomer at the NASA Ames Research Center in Mountain View, California. “We know that molecular clouds are turbulent, so you would suspect massive stars could form in those conditions.”

“Recently, there has been a lot of observational, theoretical evidence of the cloud-to-cloud collision as the formation mechanism of massive stars,” says Toshikazu Onishi at the Osaka Prefecture University in Osaka, Japan, and co-author on the new study. “This paper provides the first observational evidence of [cloud-to-cloud collision] for massive star formation in the [Triangulum Galaxy].”