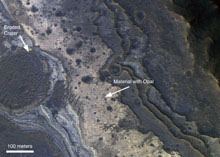 Opal has been detected on Mars by NASA's Mars Reconnaissance Orbiter (MRO), an encouraging sign that water may have existed on the planet as recently as two billion years ago. The opal, a hydrated silicate, is the youngest hydrated mineral yet to be found on the 4.5 billion-year-old planet and significantly widens the window of time that Mars is believed to have supported water.

"This is an exciting discovery because it extends the time range for liquid water on Mars, and the places where it might have supported life," [SPACE.com]

said team leader Scott Murchie. Hydrated minerals require water to form and two types have been found on the Red Planet before.

The opal deposits were detected by the MRO's CRISM spectrometer, which

"was there long enough to alter some of the rocks.... It wasn't an overnight process" [SPACE.com].

works by "reading" over 500 colours in reflected sunlight to detect particular minerals on the Martian surface [BBC News]. NASA's Spirit rover had previously encountered similar hydrated silicates in the Gusev Crater but the new deposits are located in and around the gargantuan canyon system known as Vallis Marineris, in terrain less than 2.5 billion years old. "It's definitely in terrains that are younger than the terrains where we find clay minerals or sulphates,"

"The opaline silica deposits would be good places to explore to assess the potential for habitability on Mars, especially in these younger terrains," [BBC News]

Milliken says. But it looks like a long wait before scientists will get their remote-controlled rover shovels on these new gems. Unfortunately, NASA's Phoenix lander currently on Mars is nearing the end of its life and the Mars Science Laboratory rover set for 2009 already has a packed schedule. Related Content: DISCOVER: Ole Mars River 80beats: In the Dark and the Cold, Mars Phoenix Lander Begins to Shut Down 80beats: Martian Gullies Were Formed by Liquid Water 80beats: 4 Billion Years Ago, Mars Was Wet and Wild 80beats: Mars Water May Have Been Suited for Pickles, Not for LifeImage: NASA/JPL-Caltech/Univ. of Arizona

The SciencesMagnetars: City-Sized Magnets Born from Dying Stars
Recommendations From Our Store