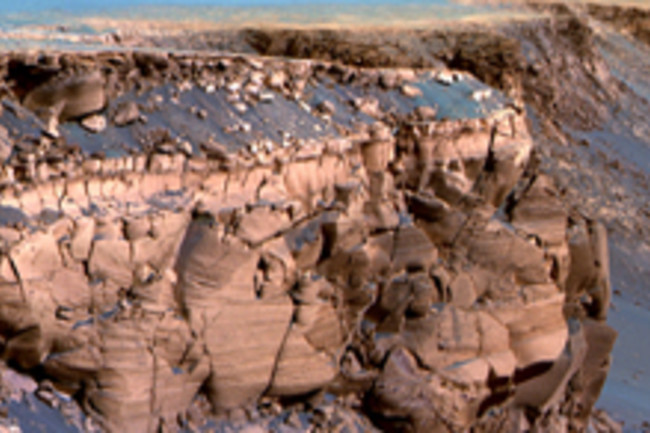 For two years, the Mars rover Opportunity explored the Victoria crater and dutifully sent back reports on the sedimentary rock layers on display in the crater walls and the scattering of pebbles on the sunken floor. Now, the results of that comprehensive survey have been compiled and compared to data gleaned from Opportunity's exploration of two smaller craters several miles away. The study shows that shifting

sand dunes on ancient Mars once concealed a network of underground water spread across an area the size of Oklahoma.... "Given that we've seen the same stuff at places that are miles apart, it is a reasonable conjecture that those processes operated over most of this region" [National Geographic News]

The rover had previously explored the Eagle and Endurance craters, about 3.7 miles (6 kilometers) away from Victoria. Mission scientists chose Victoria as the next crater to explore because "it was the biggest crater we could possibly find," said Steve Squyres.... The science team hoped that Victoria's depth — of about 400 feet (125 meters) — might shed more light on the geology of the Meridiani Planum region [LiveScience].

Like a child in a fairy tale following a trail of pebbles, Opportunity also studied the small, round rocks made of the mineral hematite as it trundled towards the Victoria crater in 2006. Opportunity had previously found the hematite rocks at the bottoms of the Eagle and Endurance craters. But as

the rover drove south toward Victoria, there were fewer hematite spheres known as "blueberries." The mineral hematite typically forms in water so blueberries provide some of the best evidence about the planet's wet past. Rocks deep inside the Victoria crater contained big blueberries, indicating the rocks higher up had less interaction with water. This suggests water's source was likely underground, the team concluded [St. Louis Post-Dispatch]

The paper, published in Science, gives researchers a better understanding of how wind and water shaped the Martian landscape billions of years ago, but researchers want to look deeper still. Opportunity is currently en route to yet another crater, Endeavor, although there's no guarantee the aging rover will complete the seven-mile journey.

Opportunity's long trip will be worth it, Squyres says, because Endeavor is an older crater than either Victoria or Endurance, with very different features -- the scientists hope to get a look at the bedrock that lies beneath the sedimentary rock they've seen in the previous craters [PBS].

Opportunity currently has a monopoly on roving glory, as its twin rover, Spirit, is stuck in the sand on the other side of the planet. The two rovers have surpassed all expectations by continuing to function five years after their landing on Mars, and researchers don't know how much longer they've got.

"They're going to die when they die," Squyres says. "Every day is a gift" [PBS].

Related Content: 80beats: Early Mars: Cold and Wet, But Potentially Still Full of Life 80beats: Will This Mars Rover Ever Rove Again? Spirit Gets Stuck in the Sand 80beats: The Little Rovers That Could Mark Their Fifth Anniversary on Mars 80beats: Hardy Mars Rover Sets Off on What May Be Its Final MissionImage: Steve Squyres