Mars Phoenix Lander Gets Its First Taste of Martian Ice 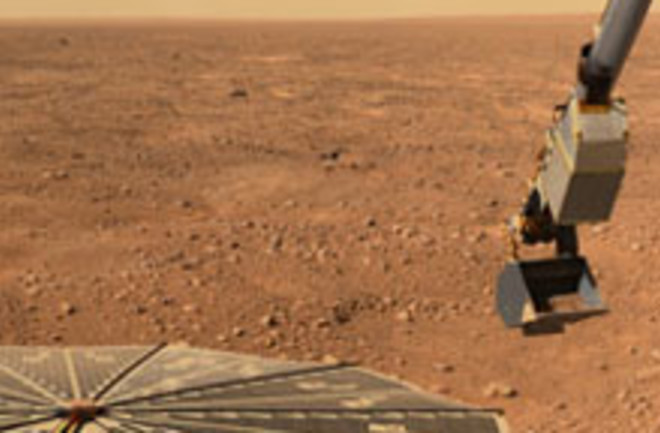 The plucky Mars Phoenix Lander has completed yet another portion of its mission successfully by gathering direct physical evidence that there is water ice on Mars. The lander had previously taken pictures of white chunks at the bottom of a trench it dug; scientists deduced that those chunks were water ice because they vaporized as the Phoenix watched. But now, by heating a soil sample that contained a small amount of ice, scientists have confirmed the discovery.

“We’ve now finally touched it and tasted it,” [said researcher] William V. Boynton.... “And I’d like to say, from my standpoint, it tastes very fine” [The New York Times].

To make the final call, the Phoenix delivered a scoop of soil to a tiny oven called the thermal and evolved-gas analyzer, or TEGA.

When heated, the targeted material in the soil melted at the expected temperature [at which water melts], which Phoenix scientist William Boynton called definitive proof. "The fact that it melted at 0 degrees centigrade leaves very little doubt" that it is water, said Boynton [Los Angeles Times].

Sensors in the oven also tested the chemical makeup of the vapor released as the sample heated,

and found the familiar combination of two hydrogen atoms and one oxygen atom [The Washington Post].

This breakthrough came as something of a surprise to NASA scientists, who had spent several weeks wrestling with the sticky clods produced when the Phoenix scooped up a combination of soil and ice.

After two failed attempts to deliver ice-rich soil to one of Phoenix's eight lab ovens, researchers decided to collect pure soil instead. Surprisingly, the sample was mixed with a little bit of ice, said Boynton [AP].

NASA also announced that the Phoenix Lander's mission has been extended by five weeks and is now scheduled to end on September 30,

saying its work was moving beyond the search for water to exploring whether the Red Planet was ever capable of sustaining life [New Scientist].

NASA scientists plan to heat the current soil sample to higher temperatures next week to check for carbon-based compounds, and will continue to try to maneuver a sample with more ice into one of the Phoenix's remaining ovens. Image: NASA/JPL-Calech/University of Arizona Related Posts: Mars Phoenix Lander Wrestles With Sticky DirtMartian Soil Could Grow AsparagusIt's Official: There Is Ice on MarsMars Phoenix Still Looking for That First Ice CubeMars Lander Fumbles Soil SampleA Healthy Mars Lander Gets to Work