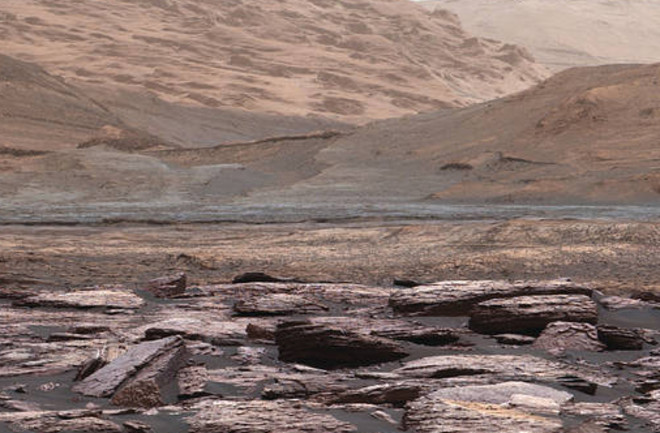 Mount Sharp on Mars, as imaged by the Curiosity rover. (Credit: NASA/JPL-Caltech/MSSS) Life on Mars ... does it exist? Depending on when you last checked in with news about the Red Planet, you could probably be convinced either way. As we discover more and more about the composition and planetary dynamics of Mars, there has been cause for both elation and disappointment regarding the likelihood that organic life could manage to eke out a living on the planet. The pendulum swung back toward the "no" side today with the release of a study examining how a special kind of salt on Mars interacts with ultraviolet radiation there. Martian soil is laced with perchlorates, an ion composed of one chlorine and four oxygen atoms, and which binds to a number of different elements to form various compounds. It's classified as a salt, and was initially cause for celebration among extraterrestrial hopefuls because it drastically lowers the freezing point of water, meaning that liquid H20 might conceivably exist on the surface. It can also be used to produce rocket fuel and oxygen, another plus for future settlers.

Salt of the Mars

It turns out that these perchlorates are actually highly toxic to life when bathed in UV radiation that pummels Mars. Researchers from the United Kingdom Centre for Astrobiology at the University of Edinburgh exposed a strain of bacteria commonly found on spacecraft to levels of perchlorates and UV light found on the Red Planet and found that nearly all of them were dead within a minute. They tried this with several different kinds of perchlorate, and found similar results every time. Adding in additional environmental factors found on Mars like low temperatures, additional minerals found on Mars and a lack of oxygen also failed to keep the bacteria alive. This was a bit surprising for the researchers because the strain of bacteria used, Bacillus subtilis, belongs to a genus that actually does fine in the presence of perchlorates, as studies of the microbes in terrestrial environments have confirmed. These findings were initially good news for researchers looking for extraterrestrial life, as they suggested that some forms of life could survive in Martian analogue conditions.

It Takes More Than Salt

There's more to Mars than just the soil though, and when the Edinburgh researchers added in a few more Mars-like factors — UV specifically — the bacteria died in short order. They think this happens because the UV light breaks apart the perchlorate molecules into more reactive ions that wreak havoc on living cells. This hypothesis was backed up by the observation that low temperatures, which slow down chemical reactions, extended the lifespan of the bacteria in the perchlorates but still resulted in them dying. If they can't survive there, it significantly lowers our chances of finding life on Mars — life that looks similar to organisms on Earth at least. The researchers published their findings Thursday in Nature Scientific Reports. While it's a blow to the possibility of finding life on Mars, there is at least one upside to the news: NASA regularly worries about the possibility of contaminating other planets with Earthly bacteria, even going so far as to crash probes into Saturn so that they don't hit the planet's moons. If Mars is so hostile to bacteria that they can't even make it a minute on the surface, our fears of contamination could be pretty much resolved.