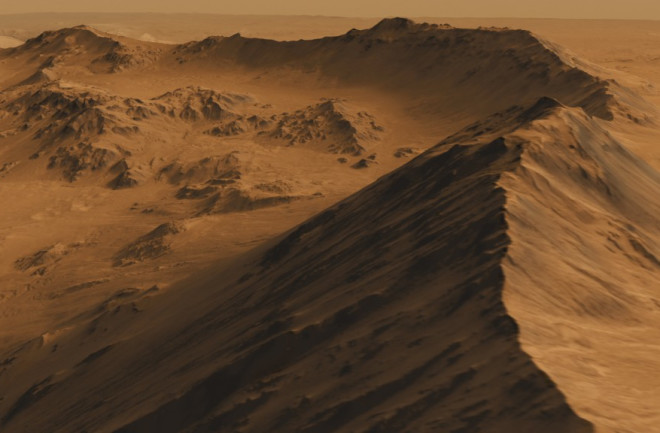 A simulated view of Mojave Crater on Mars, based on images taken by the High Resolution Imaging Science Experiment (HiRISE) camera on NASA's Mars Reconnaissance Orbiter. Image credit: NASA/JPL-Caltech/Univ. of Arizona A big impact on Mars 3 million years ago may have been the source of most of the Martian rocks that have landed here on Earth, scientists claim in a new study. The findings, if correct, mean the surface of Mars is 200 million years older than previously thought. There are about 150 Martian rock specimens in the hands of scientists today. A specific subset of these rocks, called shergottites, have sparked debate amongst meteorite experts over their age. Most research concludes shergottites are 150 to 600 million years old, but other estimates based on lead isotopes put the rocks at 4.1 billion years old. A research team from the University of Oslo in Norway have taken a new approach, by factoring in the meteorites' source. Their answer, an age of 4.3 billion years old, would make the rocks the oldest known material from Mars---but the results have been met with skepticism from other scientists.

Turning Back the Clock

Previous analysis of the shergottite rocks has indicated that they were exposed to cosmic rays for a few million years as they traveled to Earth. Therefore, they must have originated from an impact of roughly the same age. So the Oslo team started its study by searching for the youngest craters on Mars, formed less than 5 million years ago.

Mojave crater showing its well-preserved morphology and ray pattern. The direction of the red arrow indicates distant examples of secondary crater clusters. Image courtesy of Science/AAAS The Mojave Crater turned out to be the young crater the team was looking for. They determined the Mojave’s age, 3 million years, by using a specially calibrated model based on crater counting—an age estimate based on the number and size of other craters in an area. Using the same model, they also determined the age of the Xanthe Terra landscape, where the Mojave Crater formed, was 4.3 billion years old. Satellite scans confirmed that the mineral composition in the shergottites matched the composition of the crater. But that left one big question: Why did shergottites' chemistry indicate they were only 150 to 600 million years old, if they originated from a landscape that was 4.3 billion years old? The answer, the researchers posit, is that the rocks had been changed by the impact. Melting and extreme pressure from the impact that created the Mojave Crater “reset” the rocks' crystallization ages, making them appear younger than they were. The findings were published Thursday in Science.

Not everyone agrees with the study's conclusions. Thomas Lapen, an isotope geochemist at the University of Houston in Texas, told National Geographic he isn’t convinced:

Other experts are skeptical that the shergottites and the Mojave Crater share the same mineral composition. They argue that data from orbiting satellites isn't precise enough to accurately match mineral compositions. The Oslo team said they plan to continue searching for more source craters of Martian meteorites, and to keep their fingers crossed for actual samples of terrain from a Mars rover mission. However, the Mars Sample Return mission launch isn’t expected for another decade.