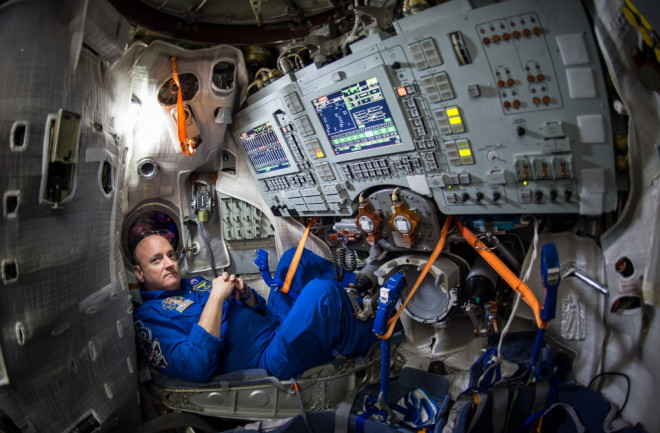 NASA astronaut Scott Kelly is currently on a one-year mission at the ISS to understand physiological effects of future Mars missions. Credit: NASA Beyond the protection of Earth’s magnetic field, charged atomic nuclei whiz through space at nearly the speed of light. This radiation is one of NASA’s biggest concerns as it considers manned missions to Mars. And a new study on mice finds that exposure to the equivalent of a few weeks of space radiation made them perform poorly on tests of learning and memory, and visibly damaged their brain cells.

Cosmic rays are a form of ionizing radiation. This means that they have enough energy to ionize, or electrically charge, atoms of any matter they pass through. In the tissues of the body, ionization leaves a trail of damage along the cosmic ray’s path. The ionization also sends energetic electrons shooting out into the tissue around the original path, causing more damage. Both Earth’s atmosphere and its much larger magnetic field protect life on Earth from cosmic rays and other high-energy radiation. The magnetic field deflects many cosmic rays before they hit Earth’s atmosphere, and the atmosphere shields the planet’s surface from the rest. The magnetic field extends about 60,000 miles into space, so though astronauts in low-Earth orbit on the International Space Station (249 miles high) are exposed to cosmic rays, it’s much less than they would face on more distant missions. And though the astronauts who traveled to the Moon during the Apollo program ventured outside Earth’s magnetic field, they spent just a handful of days on the trip. A manned flight to Mars would require much more time in deep space, which could mean dangerous exposure to cosmic rays.

Researchers were especially interested in the brain’s prefrontal cortex and hippocampus, both areas involved in memory. Earlier experiments with proton radiation, the type used to treat some brain tumors, showed it can damage neurons in mice’s hippocampi. That matched well with doctors’ observation that human patients who receive radiation treatment for brain cancer often develop cognitive deficits, such as becoming more easily confused. In the latest experiment researchers tested the same kinds of charged particles that make up cosmic rays: ^16O (oxygen nuclei with a positive charge of 16) and ^48Ti (titanium nuclei with a positive charge of 48). Researcher Charles Limoli says that the mice received about as much radiation as they would have in about ten to thirty days in deep space.

Artist's rendering of a manned mission to Mars. Credit NASA

Six weeks after their radiation exposure, the mice were given tests that assessed their memory and their ability to react to novel objects and situations. Compared to mice which hadn’t undergone radiation, the mice in the test groups showed less curiosity. They also showed poorer spatial memory and episodic memory, the memory of specific events, times, and places. What’s more, when researchers examined the mice’s brains under a microscope, they found that the radiation had snapped off crucial parts of the neurons. In treated mice the dendrites — branching, tree-like structures that receive information and transmit it back to the nucleus of a neuron — were shorter, with fewer branches. Loss of dendritic branches is linked to cognitive decline in Alzheimer’s and other diseases.

Preparing for the Future

Limoli says it’s difficult to determine exactly how long a human would need to spend in deep space before suffering from cognitive problems, but he told Discover, “Three to six months would be a good estimate for the start of any potentially adverse cognitive side effects.” Using current technology NASA estimates a one-way trip to Mars would take six months. Future missions in deep space would need to protect astronauts from cosmic rays. It’s theoretically possible to shield a spacecraft’s hull, but it would be expensive and might make the spacecraft too heavy to launch. Limoli suggests that future strategies might include new shielding materials, shielding only certain areas of the spacecraft, or even shielded helmets. He also said that medications might help mitigate the effects of radiation. For now, more research is needed to better understand how ionizing radiation damages brain cells and how long its effects might last. Space-based studies are planned, but Limoli says they will be limited, since they’ll still take place inside Earth’s magnetic field.