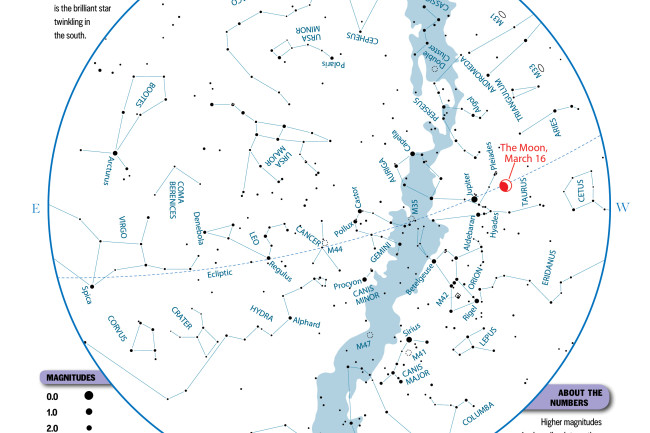 Click on image to enlarge. For more on this month's sky, go to <a href="http://www.astronomy.com">Astronomy.com</a> | Rich Talcott

The crescent moon is one of most ubiquitous symbols of the night sky, and one of the most misunderstood. Children’s books are rife with crescents, often used to signal that a story ends at bedtime. And yet for those of us north of the equator, almost all of those moons face the wrong way: illuminated on the left, like a letter C.

In reality, at mid-northern latitudes, the evening crescent moon is lit up on the right, facing toward the western sky where the sun has just set. The left-illuminated moon is the one we see when it appears just before dawn, a cruel time to put a child to sleep.

Look closely at a thin waxing crescent—you’ll see a nice example on the 16th of this month—and you will notice that you can dimly see the rest of the moon as well. This is traditionally called “the old moon in the new moon’s arms.” You are looking at moon rocks reflecting the light of the Earth, which shines nearly 50 times as brilliantly in the lunar sky as the moon does in ours.

The 2019 South American Eclipse, as Captured By Those on the Ground