March is national Red Cross Month, and Mercury and Venus offer their finest views from Earth. 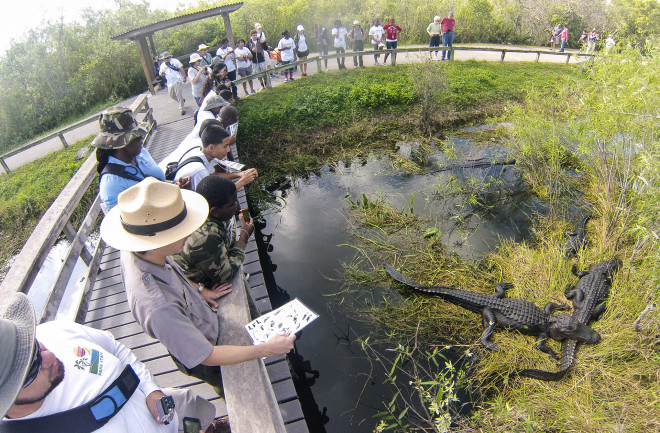 In March you can visit the Everglades to discover a lost civilization. And also alligators. | NPS Photo / J Roark

All month: Donate blood to honor Red Cross Month. Every two seconds, someone in the U.S. needs blood, according to the American Red Cross. An estimated 38 percent of the population is eligible to give, but less than 10 percent actually do so.

March 1: Louisville’s new WaterWorks Museum touts the municipal system that saved the city — known as the “Graveyard of the West” in the 1830s — from water-borne diseases.

March 1-2: Aldo Leopold Weekend. Have a copy of A Sand County Almanac close at hand as communities around the world plan marathon readings of the iconic environmentalist’s best-known work.

March 6: Timbers of a 121-foot-long warship from around 1025 are the centerpiece of the British Museum’s “Vikings: Life and Legend,” opening today. (Pillaging strongly discouraged.)

March 12: Since first meeting on this day in 1912, Girl Scouts have fulfilled founder Juliette Low’s mission of getting out of the home and into the world, and even farther: Nearly all female astronauts, including Eileen Collins, are former Scouts.

March 14 & March 22: Mercury and Venus achieve elongation, their greatest distance from the sun and best viewing potential, within days of each other this month: Mercury on the 14th and Venus on the 22nd.

March 26: Who's afraid of the big bad wolf? Humans are, according to Nova’s “Wild Predator Invasion,” premiering tonight on PBS.