Magnetic Fields May Be to Blame for Jupiter's Skin-Deep Stripes 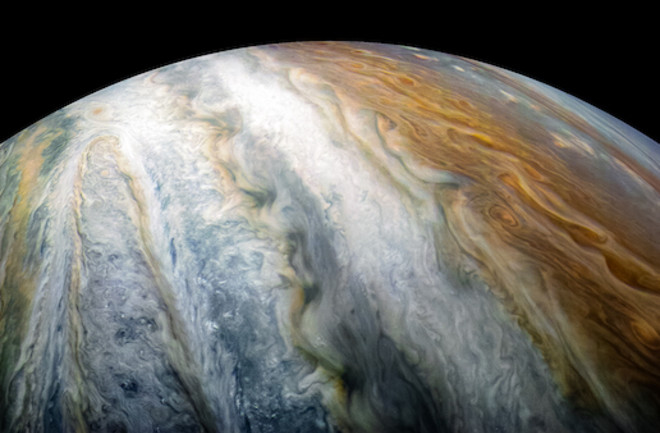 Jupiter's signature stripes are streams of gas that flow in alternating directions. (Credit: NASA/JPL-Caltech/SwRI/MSSS/Kevin M. Gill)What would Jupiter be without its stripes? The Great Red Spot might be Jupiter’s most famous feature, but the giant planet would be unrecognizable without the multicolored bands streaking across its face. The colors are there thanks to the chemistry of Jupiter’s atmosphere, but the striped pattern itself comes from long-lived winds called zonal flows that blow east-west around the planet in alternating directions. These zonal flows are similar to the jet streams high in Earth’s atmosphere. Unlike Earth, Jupiter doesn’t have pesky geographical features like mountains interrupting these winds, so the zonal flows stream in (mostly) smooth lines, making the stripes we know and love. For a long time, scientists debated how deep into the planet these striped features might extend. Were the zonal flows only on the surface of Jupiter, or did deeper layers of gas flow in stripes of alternating directions too? Part of the mystery was solved earlier this year when detailed observations from NASA’s Juno mission revealed that the zonal flows are roughly 1,900 miles — about 4 percent of Jupiter’s radius — deep. Below that, the gases that make up Jupiter rotate as a single cohesive object. But why? https://youtu.be/hF0UjhPSS3A

In a paper in The Astrophysical Journal last week, physicists Jeffrey Parker and Navid Constantinou calculated how magnetic fields could prevent these zonal flows from forming deep within rotating spheres of fluid - like those on the gaseous giant Jupiter. In the past, simulations have shown that magnetic fields can discourage zonal flows, but Parker and Constantinou have now explained in detail the physical mechanisms of the effect. The study might help scientists better understand our largest planetary neighbor.“The zonal flows themselves have a really large effect on the dynamics of the planet," Parker says. "So understanding the zonal flows in Jupiter tells us a lot about the planet. And the interior has really been a mystery so far. Any understanding of the interior is very new.”To nail down whether the newly described mechanisms are in fact responsible for the lack of zonal flows within Jupiter, the researchers plan to work with scientists running NASA's Juno mission. That should allow them to compare their theory to the observations in much greater detail. Parker is excited to be doing this theoretical work just as we are getting data from the Juno spacecraft, which entered into orbit around Jupiter in 2016. “Often, what theoretical physicists do — we have our models, and it’s not always easy to know if they’re right or to compare with experimental data," Parker says. "You often have to wait for the right dataset. This is one of the rare occurrences — at least in my work — that there is a strong connection directly to measured data in something really cool like Jupiter.”