The Lunar Reconnaissance Orbiter has returned another incredible picture of an Apollo landing site, this time of our second manned walk on another world... and again, the footprints of the astronauts are clearly visible! 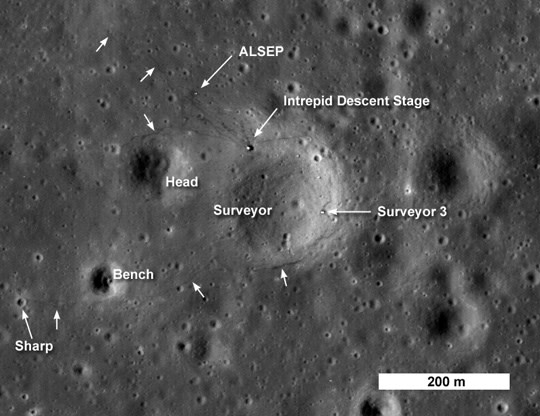 In November 1969, Apollo 12 touched down near the Surveyor 3 probe, which had soft-landed two years previously. The astronauts walked up to the lander and even brought back pieces of it! Surveyor is easily seen in this image, as well as the craters Pete Conrad and Al Bean investigated. In this high-resolution image (taken in September), you can even see their bootprints radiating away from their lander! After the other Apollo images from LRO, I know this is more of the same. But don't let it fall from your mind that these images show that once, not long ago, we dared to explore. For those few shining moments, we reached farther than our grasp, and managed to do something extraordinary. We let that slip away not too much later. Yes, our robots probe and peer into every corner of the solar system, and have done a magnificent job. But I am of the opinion that we need to send men and women out there as well, to extend the human presence beyond our own planet, beyond a simple low-Earth orbit. I don't know when we will exceed our grasp again. But I hope it's soon.