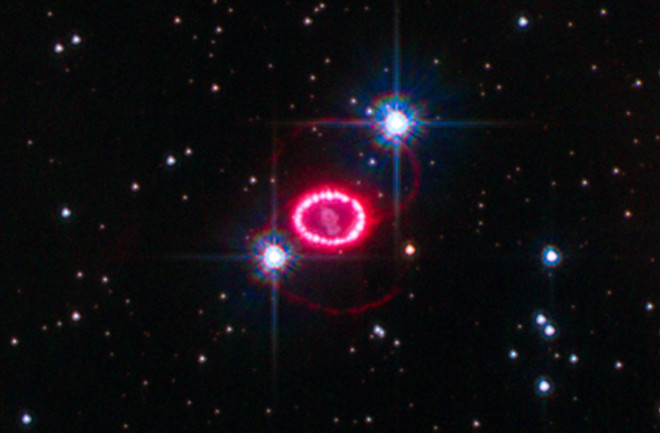 The one ring is back, and it's beautiful. What you see here is the aftermath of stellar death, rediscovered after NASA temporarily lost the ability to watch it play out. Astronomers tracked supernova 1987A after its discovery that year, picking up insights into what happens after a huge star expends itself. But in 2004, the Hubble Space Telescope's Space Telescope Imaging Spectrograph went kaput. The May 2009 space shuttle servicing mission repaired this eye in the sky, leading to a study in this week's edition of the journal Science that reveals what's behind this fluorescent view, and why that ring shines so brightly.

In the Hubble images of SN1987A, what looks like a string of pearls appears around the site of the former star. These "pearls" of circumstellar material are made up of material that was emitted before the star exploded, as it was preparing to die. Light from the supernova itself illuminates the pearls (as seen in these images of the supernova), and as the supernova debris interacts with the circumstellar material over time, the pearls will eventually form a continuous ring around the remnant, [lead researcher Kevin] France said. [MSNBC]

They also think that some of the shock waves are bouncing back off the debris. The team has used Hubble's imaging spectrograph to map the velocity and chemical composition of this moving gas. "Although we always knew it was there, this is the first time we've actually been able to see this reverse shock [in supernova 1987A]", says Richard McCray, an astrophysicist at the University of Colorado and a co-author on the study. [Nature]

This supernova remnant is close to 170,000 light years away. Hubble's refurbished imaging power has allowed the team to investigate the elements in the area—the stuff of the former star now spilled out, including heavy elements like silicon and iron.

Such research is crucial to understanding the bigger picture of how supernovae affect their environment, says France. Supernovae have an important role in the evolution of galaxies, because they input a massive amount of energy into the environment, and they are the source of most heavy elements, such as iron, he says. [Nature]

80beats: Prepare To Be Amazed: First Images from the Repaired Hubble Are Stunning