Looking for Life in All the Wrong Places? 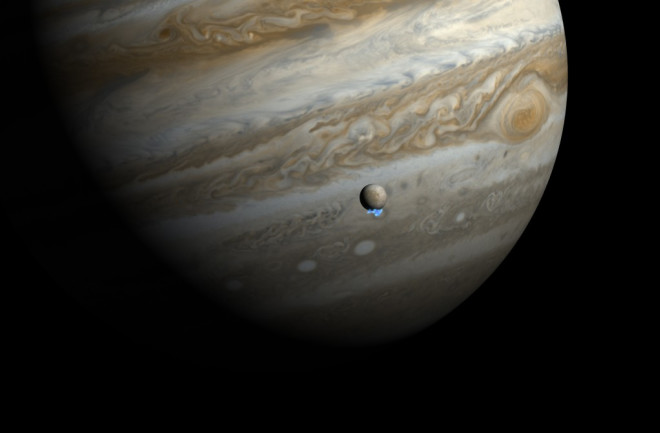 Europa, seen orbiting in front of Jupiter, emits plumes of water (visualized in blue). Beneath its icy crust is an ocean as extensive as all of the oceans on Earth combined. The waters of Europa are a hugely promising place to search for life, but so far Mars has received almost all the attention. (Credit: NASA/ESA/SWRI)

The past couple weeks have seen a brain-sparking series of discoveries that advance the search for life beyond Earth. Enceladus is emitting burps of methane, which strongly indicate the presence of a warm ocean under its ice (and which could, just possibly, hint at biological activity down there).

Ganymede seems to have its own buried ocean, one that may contain more water than all of Earth’s oceans combined. A new study shows that organisms could potentially evolve in the frigid methane lakes dotting the surface of Titan. And NASA is poised to send a spacecraft to Europa to see if anything could be alive in the extensive waters below its fractured, frozen surface.

There is a surprising — no, revolutionary — theme to these announcements. All four of these bodies are icy moons in the outer solar system; Europa and Ganymede orbit Jupiter, while Enceladus and Titan circle Saturn. Titan, the largest, is less than half the diameter of Earth and is the only one with an atmosphere. Enceladus, the smallest, is just 300 miles wide.

These are not at all the traditional places scientists have talked about when they considered the possibility of alien life elsewhere in the solar system. The story used to be all about Mars. Now it is clear that most of the water, most of the organic chemistry, and by extension most of the potentially habitable territory in the solar system resides on or in ice moons. If that’s true in our solar system, there’s a good chance it’s true around other stars across our galaxy and beyond.

Currently there are five orbiters and two surface robots exploring Mars. Here are the equivalent numbers for the four moons: Europa, 0. Ganymede, 0. Enceladus, 0. Titan, 0. We may have been looking for life in all the wrong places.

Strange patterns of aurora glows on Ganymede, Jupiter's largest moon (visualized at left), are the magnetic signal of an extensive ocean deep inside (right). (Credit: NASA/ESA/STScI)

That’s the bad news. Now that good part. The Cassini spacecraft orbiting Saturn is performing local observations and occasional flybys of Enceladus and Titan. Archived information from NASA’s Galileo probe, along with new data from the Hubble Space Telescope, are deepening our understanding of Enceladus and Ganymede.

Europe is working on a spacecraft called JUICE, which will examine Ganymede in detail. And the Obama administration is poised to approve the Europa Clipper, the first mission dedicated entirely to one of these icy moons; it could launch as early as 2022. In short, our explorations are starting to catch up with our fast-changing knowledge.

Getting to the next stage of understanding won’t be easy. The icy moons are far away, making them time-consuming and costly to reach. A trip to Mars takes about 8 months. Galileo needed 6 years to reach Jupiter, and Cassini’s voyage to Saturn was a 7-year undertaking.

NASA also has a whole planetary-science bureaucracy built around the exploration of Mars. There are a lot of careers tied to the Red Planet. At the same time, it’s hard to ignore the contrast. This past week, a group of researchers reported that the Red Planet probably had a vast ocean covering its northern hemisphere. It was an encouraging discovery, one that got quite a bit of news coverage.

That ocean on Mars dried up about 4 billion years ago, however. The oceans of Enceladus and Europa are calling to us right now. If we want answers—if we want to find life, or the processes leading up to life—those are the places where we have to go.

To put these latest discoveries in perspective, I spoke with Louise Prockter of Johns Hopkins University’s Applied Physics Lab. She is a longtime evangelist for Europa, and her studies have done much to inspire the current plans to send a spacecraft there.

Last year, Prockter helped show that Europa has plate tectonics, just like Earth. That finding means its surface exchanges material with the ocean below, which boosts the case for life. That finding also demonstrates how thoroughly scientists had overlooked the most exciting worlds of the solar system until very recently.

Excepts from my interview with Prockter follow. You can read more about her, and about the science of icy worlds, in my Out There column in the March issue of Discover (currently available only to subscribers). You can also follow me on Twitter for all the latest space news: @coreyspowell

Scientists slowly built the case that Europa has a buried ocean. Now it seems like that work is really paying off, as they realize that Europa is hardly unique—do you agree?

Louise Prockter: Yes, I think that’s absolutely correct. What surprised me maybe over the last ten years is that it seems like these oceans are common. Instead of being the exception, maybe it’s normal to have an ocean in an icy planet or an icy body, and there are so many icy bodies that we haven’t even looked at yet. Enceladus is tiny [only about 300 miles in diameter]. If you think about it, it’s really surprising that it still has liquid water in its interior. There is so much we don’t know about the interior of these icy bodies. The great thing about Europa is it’s comparatively accessible to us. We think of Europa as the poster child for icy satellites. I think if we can understand Europa it’ll just make great leaps towards understanding what’s going on in these other bodies.

Prockter: A lot of it depends on the physical conditions [such as the thickness of the surface ice]. There might be a massive, really well-developed ecosystem under the ice that we will never get to see, at least not any time in the near future, that might show no expression on the surface whatsoever. We hope that’s not the case. We think that because it an active world, that we are seeing the cycling of material.

With something like the Europa Clipper, understanding the exchange process is really important, because there is this idea that the radiation environment of Jupiter creates interesting chemistry on the surface, such as oxidants that could be transported down into the ice and into the ocean. So you’re creating chemical energy that you can take down there.

The other big thing that the next Europa mission has to do is really get at the chemistry, really get at the composition of the surface and understand the kinds of organic compounds there. What are the organics on the surface, and how are they affecting by the radiation, and where are they coming from? We know that there are interesting compositional variations associated with certain types of features on Europa. The “chaos regions” on Europa often have really cool, interesting dark material associated with them. Is that ocean material? I think we will be able to answer that question.

Europa has a dynamic icy surface that could carry life-sustaining chemicals into the underlying ocean. The only way to know for sure is to go and look. (Credit: Noah Kroese, I.NK)

Hubble observations show that Europa shoots out plumes of water, at least some of the time. Could we fly through one of them, collect a sample, and bring it back to Earth for study?

Prockter: Yes, exactly. It would not be difficult to do that. But a problem with returning samples from the outer solar system is: do you keep them cold? Keeping them cold, keeping them at the temperatures at which you find them is very challenging. In some ways it’s almost easier to go and sample them in situ, try and take some kind of chemistry lab with you, but we’re a long way from being able to do what they’re doing on Mars with the Curiosity rover.

Will studies of Europa also help us make sense of dwarf planets Pluto and Ceres, and vice versa?

Prockter: Probably Pluto more so than Ceres, but every little bit helps. Everything we learn about one body, it helps us understand the rest of the solar system. My old adviser, Jim Head, used to say the solar system is like a huge laboratory. If you want to see what happens if you do impact in a vacuum, you can go to the moon.

If you want to see what happens if you do impact with a thick atmosphere, you go to Venus. So here we can compare what happens with certain conditions, a certain distance from the sun, and a certain composition to the ice and the ocean. I’m particularly interested in what the surface of Pluto will look like, because maybe it won’t be as young as Europa, but it will probably–well, who knows what it will look like. [New Horizons will get a great view when it flies by Pluto this July.]

If it has surface features similar to Europa that will be very interesting. Right now the surface geology on Europa seems quite unusual. We haven’t really seen things exactly the same. So yes, Pluto is going to be very interesting and will definitely inform our understanding of Europa.