Liquid Water Could Be Just Beneath the Surface on Mars 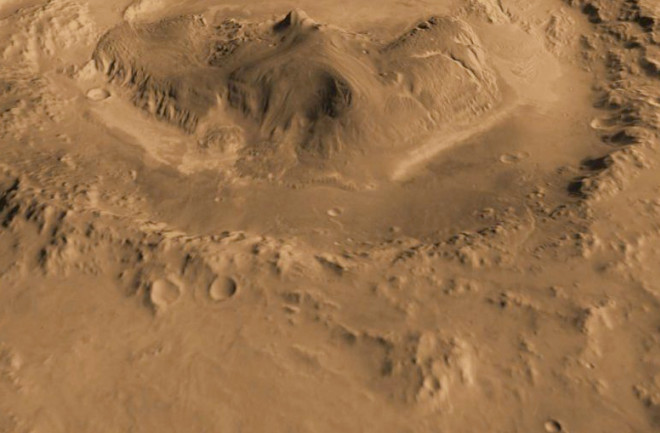 Gale crater on Mars. Image credit: NASA/JPL/CalTech It’s nothing you’d want to baste a turkey with, but researchers have found evidence of supersalty brines on the surface of Mars. By lowering the melting point of water and actively absorbing vapor, the salts might allow for liquid water to exist on Mars — not billions of years in the past, but right now. A Salty Solution Here’s how it works: Mars has water vapor in its atmosphere. At night, that water vapor sublimates (turns from liquid into solid) as ground frost, just like it sometimes does on Earth. But when the frost lands on soils laced with calcium perchlorate, Ca(ClO4)2, it melts. The perchlorate absorbs the water and forms a salty solution. And just like the salt we sprinkle on winter roads, the martian salt lowers water’s freezing point. Instead of icy dirt, salt may give Mars wet dirt, with the liquid water seeping down into the soil. Prediction Come True Last July, a team at the University of Michigan in Ann Arbor predicted that exactly this kind of chemistry might be happening on Mars. Obsessed with what appeared to be liquid droplets on the leg of the Phoenix lander, they holed up in their lab to figure out how that was possible. In their Mars Atmospheric Chamber, an apparatus that would look at home in a brewery, they simulated Mars’s conditions to see if they could wring water from the air. “When the scientists placed calcium perchlorate or salty soil directly on a 0.1-inch-thick ice layer, drops of liquid water formed within minutes when the chambers reached -100° F,” said a LiveScience article from the time of discovery.

Hypothetical water cycle on Mars. Credit: Martín-Torres and Zorzano This new discovery builds on that. Researchers found perchlorate in the soil of the Gale crater and calculated that humidity and temperature would be right for brine formation in that same region. The necessary conditions exist at night and just after winter sunrise, the researchers report in Nature Geoscience.Postcards from Mars Curiosity has spent almost three years on Mars. In all that time, it’s traveled a whopping 10 kilometers from its landing site. That’s the distance of a weekend warrior’s running race (although no one has to command and control a weekend warrior’s every step from millions of miles away), a short distance that nevertheless has given the rover a taste of different martian environments. Curiosity has shown us that Mars used to have habitable spots (even if nothing/no one inhabited them) and that billions of years ago, it had an ocean that could have covered the whole planet in 450 feet of water. And findings like this brine show present-day Mars to be a bit more life-friendly than we thought. On Earth, for example, organisms called halophiles (salt lovers/lickers) would love to live in calcium-perchlorate-land. But, as the authors caution, there’s a lot more to habitability than “just add water.” Mars is dry, cold, and irradiated, and so far shows no evidence that anybody is home. And the dirt where these brine remnants were seen, Gale crater, gets too cold to host any known microbes. But liquid brines might be abundant across Mars’ surface. So, some further trekking might eventually reveal whether any salty critters still call those soils home.