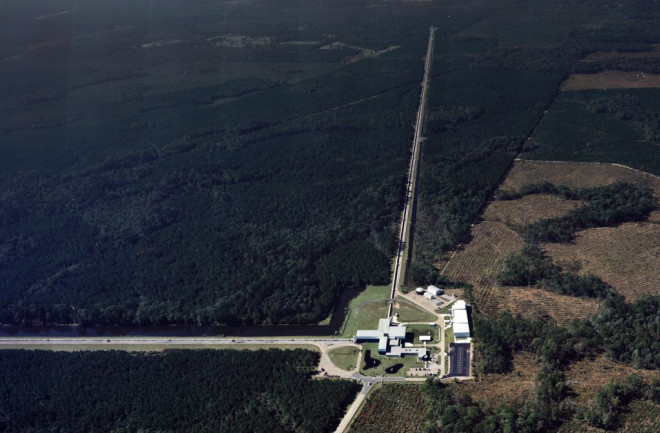 An aerial view of the LIGO gravitational wave detector in Livingston, Louisiana. (Credit: LIGO.) Chad Hanna was enjoying a quiet Christmas night with family in rural western Pennsylvania when he got the text message. He sprang for his phone, surprising his in-laws. Then he grabbed his laptop and flew up the stairs to an empty bedroom. The cosmos had quietly gifted scientists with a second gravitational wave, dubbed GW151226, from two black holes that collided 1.4 billion light-years away. The signal from those black holes — one 14 solar masses and the other eight — showed the final dozens of death spirals before the pair smashed together with such intensity that a mass equal to our sun radiated out as gravitational waves. That announcement came Wednesday at the American Astronomical Society meeting in San Diego.

At the time of the second detection, scientists working on the Laser Interferometer Gravitational-wave Observatory (LIGO) were already confident they had the historic first signal in the bag. But that knowledge remained a closely guarded secret, even as rumors trickled out to media outlets around the world. So Hanna couldn’t explain his strange behavior. “My family had no idea what was going on,” says Hanna, a LIGO scientist from Pennsylvania State University. “In fact, they didn’t really know that much about what I do for a living. Until recently it was pretty esoteric and not something that the public at large had any experience with.”

A simulation of GW151226. (Credit: CNRS) When the drama subsided, he seized the opportunity to play a practical joke. “The rest of our holiday vacation I led them to believe that I may or may not be on a top-secret government mission to protect the world from alien invaders,” he says. ”The truth was only slightly less interesting.”

As Hanna’s family and the rest of the world learned in February, gravitational waves are ripples in the fabric of space-time. And because gravity is the weakest of the four fundamental forces, only the most extreme cosmic events like supernovas, spinning neutron stars and colliding black holes generate detectable waves. When gravitational waves move across LIGO’s twin detectors in Louisiana and Washington state, extremely sensitive equipment employs lasers to catch the waves’ tiny stretches and squeezes of space-time. The first historic chirp of two colliding black holes, detected September 14, had come as a surprise. Scientists predicted their first signal would come from merging neutron stars, which were thought to be more common than colliding black holes. And the first black holes LIGO “saw” collide were more massive than models predicted, packing 36 and 29 times the sun’s mass. Earthly observations had never turned up such monsters.

The gravitational wave from this enormous pair leapt out of LIGO’s data, confirming Albert Einstein’s general relativity, or theory of gravity, with a signal that stood tall above the noise. This second gravitational wave signal was weaker. “The first detected signal was very loud, so loud that it was possible to see the waveform in the data stream by naked eye,” Marco Cavaglià, a University of Mississippi astronomer and assistant LIGO spokesman. “In this second detection the signal is buried in the noise.” LIGO relied instead on a technique called matched filtering. The process works much like the phone app Shazam, which allows users to identify a song title and artist by recording a sample of what they’re listening to and matching it to the service’s catalog. Similarly, LIGO’s supercomputer is constantly searching for signals that match any of its hundreds of thousands of templates for merging black holes and other astrophysical phenomena.

A technician inspects one of LIGO’s core optics mirrors by illuminating its surface with light at a glancing angle. (Credit: Matt Heintze/Caltech/MIT/LIGO Lab) “The basic idea is it’s easier to find something if you know exactly what you’re looking for,” says Hanna. The second signal also wasn’t the only other gravitational wave LIGO scientists saw during their first advanced observing run. A third signal, too weak to label a formal detection, is now giving insights about how often black holes collide in our universe. “The best guess we have is that binary black holes merge in our universe at the rate of a few per hour,” says LIGO scientist Jolien Creighton of the University of Wisconsin-Milwaukee. Assuming LIGO’s early data are not exceptional, scientists will soon piece together the first black hole census. Extrapolating from these mergers to the larger universe beyond what LIGO can see, the team calculates that a few binary black holes should merge every hour in the cosmos. “It does imply that we should have tens of detections over the next few years, and hundreds through the end of the decade,” says Hanna. “That’s enough to do some pretty significant astronomy. That’s a big population.”

On to Neutron Stars

LIGO scientists say they’ve now reported all observed gravitational waves from merging black holes that happened in their first advanced observing run. However, they’re still analyzing the data in search of merging neutron stars. That research could bring new surprises in the coming months. The early detections do hint at a bigger find still waiting out there — a persistent background of gravitational wave signals streaming over Earth from mergers all over the cosmos. “With these detections we have evidence that the stochastic background is higher than what we previously expected and is potentially measurable once Advanced LIGO and Advanced Virgo will be operating at their design sensitivity,” Cavaglià says. That should happen in the coming years.

The next frontier for gravitational waves is to study their sources with electromagnetic radiation immediately after a LIGO detection. There were some tantalizing results after the historic first gravitational wave signal, when NASA’s Fermi gamma-ray telescope also saw something that might possibly have been related in the same general region of the sky. Other telescopes turned their gaze and saw nothing. But the LIGO collaboration stumbled with that step on its second signal, giving scientists a lesson in overcoming the bureaucracy of their enormous collaboration.

The approximate location of the first gravitational wave detected in September. (Credit: LIGO/Axel Mellinger) Hanna and other LIGO scientists received text alerts almost instantaneously on Christmas night and then quickly rallied to analyze the signal. But the next step wasn’t automated. LIGO is supposed to tip off hundreds of scientists working on more than 60 partner teams so they can try and train their telescopes onto the source, which could have come from anywhere across a vast region of the sky.

The holiday timing proved a perfect storm that stopped the team from notifying the larger astronomy community right away.

The collaboration hasn’t changed its policies yet, but the expansive team hopes to have new procedures in place by the time LIGO starts its second advanced run later this summer. “In the future we want to make this much more streamlined,” Hanna says. “This was our first run.”