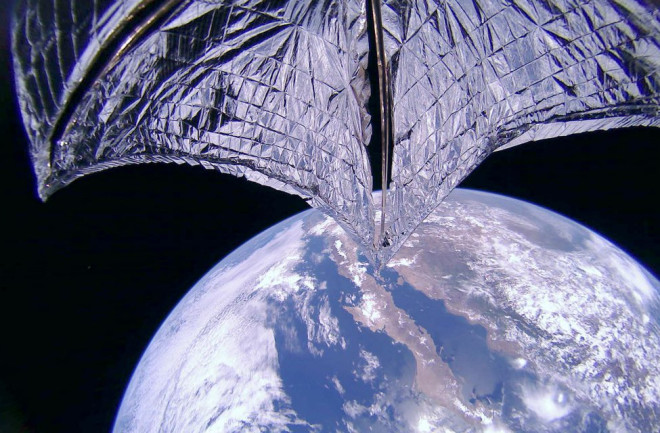 LightSail 2 took this picture of itself, with Earth in the background, while deploying its sail on July 23. (Credit: The Planetary Society)

The Planetary Society, a non-profit organization focused on space exploration, has successfully transferred their LightSail 2 spacecraft from one orbit to another using only the power of sunlight, a first. The recent success not only proves the effectiveness of solar sailing technology, but also opens up a new, more cost-effective way to propel small spacecraft.

The Planetary Society has been working on a solar sailing technology for roughly two decades. The idea behind solar sailing is that instead of using propellant to maneuver a spacecraft, engineers can use the radiation pressure of sunlight to push the spacecraft around, with the help of a large (340 square feet) Mylar sheet as their sail.

Earlier versions of the project had a rough go of it, with two attempts in the 2000s destroyed by rocket malfunctions. But because the Planetary Society was simply purchasing a ride aboard other companies’ rockets to get to orbit, this wasn’t their fault, even if it did set back their efforts a number of years.

In 2015, LightSail 1 launched and successfully deployed its solar sail, unfolding the thin Mylar sheets into one large sail. But that was as far as the first test went. This year, LightSail 2 launched on June 25, deploying its sail a month later on July 23. And today, it has used that sail to harness the power of sunlight and successfully change its orbit.

Bill Nye, science communicator and CEO of the Planetary Society, said “For me, it’s very romantic to be sailing on sunbeams.”

In the modern era of space exploration, it’s not just government agencies getting in on the action. While companies like SpaceX and Boeing often get press for building the large rockets of today and tomorrow, it’s also important for other organizations to learn how to maneuver a spacecraft once it’s in orbit.

The spacecraft turns, catching sunlight when it wants a boost, and turning edge on to the sun when it doesn’t. (Credit: Josh Spradling/The Planetary Society)

Most vehicles carry propellant to adjust their trajectories when needed. But over time, many of their orbits will degrade, bringing them to the outer edges of Earth’s atmosphere. Here, the drag of air particles, if left uncorrected, will siphon off energy, pulling the craft closer to Earth. Other times, minor corrections are needed to avoid close encounters with other spacecraft. And of course, many spacecraft are first deposited into a convenient orbit by a rocket before they maneuver into their final, preferred orbital path.

But propellant is a consumable resource, so eventually all spacecraft will run out of fuel — that is, unless they can use a renewable resource, such as sunlight, to power their movements. By using Earth’s magnetic field to orient itself and angle its sails toward our star, LightSail 2 can control its own movements.

Of course, such a sail can provide only so much force. But LightSail was designed for CubeSats, which are tiny satellites weighing no more than three pounds that you can hold in your hand.

LightSail 2 is still a proof-of-concept spacecraft. The cameras and equipment on board are all focused on making sure controllers on Earth know that it has done its job successfully. It has laser ranging equipment so lasers from Earth can ping the spacecraft and verify its distance, as well as sensors and cameras so engineers know that the craft is operating as expected.

So far, the LightSail 2 has expanded its orbit more than a mile since it deployed its sail, much to the delight of mission managers.

“There’s no plan for LightSail 3. But that’s because we’re not a LightSail company. … LightSail 3 is for other people to take on, not necessarily with that name, but what we try to do is we try to get a technology ready to then hand off to the world and then it be implemented by others.”