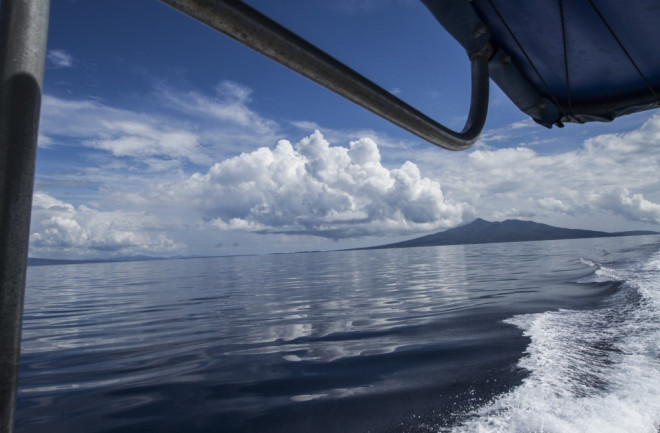 Many island nations have deep water within an hour’s boat ride from shore; here, a view of Gatokae Island in the Solomon Islands is taken over water that is at least 1000 meters deep and known to be volcanically active. (Image: Alex DeCiccio) Most countries on Earth have no way to access vast portions of their sovereign territory. In a time when you can read street signs half a world a way on Google Earth, this fact may seem surprising, but these unreachable territories all have one thing in common: they’re underwater, hidden beneath the waves. As dictated by the UN Convention on the Law of the Sea, a coastal country’s “exclusive economic zone” (EEZ) extends 200 nautical miles (370 km) into the open ocean. Everything from the sea surface on down is included – a bounty that can encompass abundant fish stocks, exotic marine habitats, and valuable mineral deposits. Brennan Phillips, a postdoctoral fellow at Harvard University’s Wyss Institute for Biologially Inspired Engineering, sees this blindness as a major problem. In order to make decisions about resource use or conservation strategy, for example, you need to know what exactly you’re dealing with. When acquiring this information is prohibitively expensive, “you just don’t do it,” Phillips explains, “so you make a decision based on very little knowledge.” As seafloor mining efforts accelerate around metal-rich hydrothermal vent fields, resource-rich countries will be under increasing pressure to sell off mineral extraction rights. Most famously, the Canadian company Nautilus Minerals is moving forward with plans to mine the Solwara-1 vent field in Papua New Guinea, one of the world’s poorest countries. While the company has solicited input from well-respected scientists, government decision makers are almost entirely dependent upon outside counsel. Deep-sea reconnaissance generally involves either a relatively affordable seafloor mapping effort or, running up to $100,000 per day, a dedicated ship with a remotely operated vehicle that can collect data and samples from thousands of meters depth. By surveying marine explorers around the world and poring over bathymetric maps, Phillips found that, of the 141 countries with deep-sea territory (EEZs that include seafloor more than 200 meters deep) just 11% have the assets available for scientists to access it. “We’re left with a binary set of tools for a nuanced problem,” he says. “We need more tools at that intermediate level to democratize deep-sea exploration and give these countries real control over their resources.”

Phillips prepares to deploy a lightweight deep-sea drop camera in the Solomon Islands. (Image:: Alex DeCiccio) Phillips is developing these kinds of tools: he’s focused on making small, battery-powered systems that can be deployed off small boats in remote field locations. One of his devices is a ‘drop camera’ that costs less than $1,000, goes to 2,000 meters depth, and is raised and lowered using a fishing reel. The key, according to Phillips, is to go light. “You have to think holistically,” he explains. “The size and power of a remotely operated vehicle dictates the thickness of its tether, which dictates the size of the winch, and how big your boat needs to be.” With these kinds of capabilities at your disposal, it’s much easier to collect data that inform management decisions. Phillips points to National Geographic’s Pristine Seas program as a good example: by including deep sea areas in their surveys of “the last truly wild places in the ocean”, the team is building protected areas around them. As anthropogenic changes continue to threaten the ecological status quo in the deep sea around the world, not knowing what’s there in the first place is a glaring weakness. “We’ve got to understand what we’re dealing with,” Phillips says, “before we even consider actions that will change these places forever.”