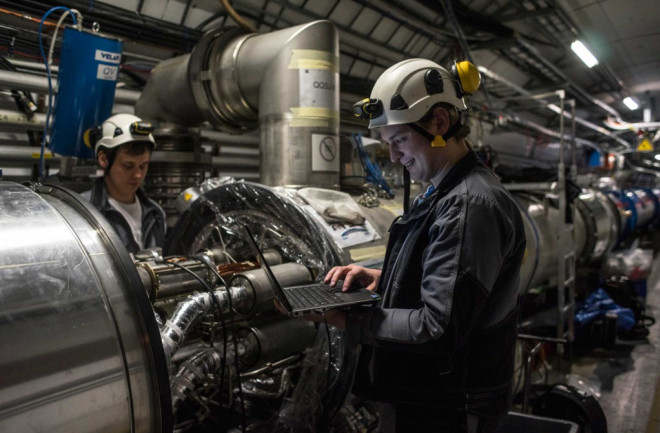 Engineers make precision measurements to some of the final splices on the LHC. Splices connect superconducting cables within the accelerator. (Credit: CERN) What began as a bump has turned out to be nothing more than a statistical ghost. Physicists at the International Conference on High Energy Physics in Chicago announced today that the much-discussed 750 GeV aberration in their data discovered by the Large Hadron Collider at the end of last year disappeared upon further testing. "There is no excess seen in the 2016 data particularly around 750 GeV, confirms Bruno Lenzi, a physicist at CERN. "All over the mass range the data is consistent with the background only hypothesis."

It was thought that the bump indicated the presence of a much larger particle new to physics, which could have held exciting implications for everything from the search for dark matter to quantum gravity. In December, two separate experiments at the newly-renovated LHC announced a puzzling surplus of photon pairs with a combined mass of 750 GeV, more than six times the mass of the Higgs boson. It was thought that the excess could be explained by a new particle at that mass which decays into photon pairs. At the time, the researchers didn't have enough evidence to say definitively whether a new particle existed or not, but the announcement nevertheless led to over 500 papers offering theories as to what the bump could be. Further rounds of tests over the winter, spring and summer probed the mystery. With today's announcement, however, it is clear that what could have been a groundbreaking discovery is no more than the product of chance.

(Credit: CERN) These kinds of false trails occur in physics fairly often, where preliminary data shows something that vanishes upon further inspection. This latest illusion was more believable than most, not least because it was observed by two different experiments. The odds of it being chance were calculated to be between 1 in 10 and 1 in 20, depending on which experiment you looked at.

Discovering a new particle could have revolutionized what physicists know about the Standard Model, a decades-old framework encompassing three of the four fundamental interactions and all of the currently known subatomic particles. So far, the Standard Model has resisted all attempts at refutation. The discovery of the Higgs boson in 2013 fleshed out a core component of the theory, creating an apparently solid basis for our understanding the universe. And that's a big problem for physics. The Standard Model might work theoretically, but it doesn't match up with what we observe to be true in our world. It can't explain the expansion of the universe and the skewed ratio between matter and antimatter, for example. An updated version of the model, called Supersymmetry, or SUSY for short, posits that each particle in our universe should have a heavier twin that interacts with our world only very faintly. This could explain why things like dark matter exist. "There are things that point at it being incomplete and we don't know how to fix it up," says Chris Meyer, a post-doctoral researcher at CERN. "So the more evidence we have of things that don't necessarily fall into it right now, the more theorists can work on to complete the standard model." Those aberrations didn't appear. It was hoped that the latest upgrade to the LHC, which more than doubled its power and nearly reached its limits, would extend physicists' view far enough that they could capture some of the theorized particles. Not doing so paints a grim picture for the future of physics: having stretched our capabilities so far in search of new particles, is it worth going any further? The LHC is expensive, and public support for high-risk projects is tenuous at best.

One Step Forward Two Steps Back

Physics is a discipline defined by setbacks, and random bumps in the data are hardly unheard of. Even the search for the Higgs boson faltered at points. The question now is where to turn. "We measure the things very well that we know are there, especially the Higgs boson which is very recent, and if there is nothing else they find that is new, we need to start exploring other types of experiments," says Meyer. Matthew Buckley, a theoretical physicist at Rutgers University agrees. "They’re reaching the point where they can really start excluding or finding particles up at much higher masses than they ever could before. I don't think they're going to have results out on every possible thing we could be interested in," he says. It marks a turning point for physics. While exciting new results may still emerge from the LHC, this latest disappointment makes it more unlikely. Nevertheless, the LHC will still play an important role in years to come as researchers attempt to pin down the properties of the Higgs boson and gain more insight into how subatomic particles behave. Researchers at the LHC are still combing through data from both the first run, which ended in 2013, as well as the second run, which is currently ongoing. Some of the interactions they hope to observe happen almost vanishingly rarely, meaning that the potential for new discoveries from the LHC is far from exhausted "It should be said that everybody would be happy if were to find something new immediately," says Tiziano Camporesi, spokesperson for the CMS experiment at the LHC. "That would mean that nature is being kind to us, but nature can be more subtle than that." In addition, there are experiments around the world searching other aspects of fundamental physics, such as the Ice Cube Neutrino Observatory at the South Pole, the LIGO detectors which this year found evidence for gravitational waves and the Gran Sasso lab in Italy which is searching for dark matter directly. "What we’re doing is very difficult and the universe never promised us that new physics would be easy to find," says Buckley.