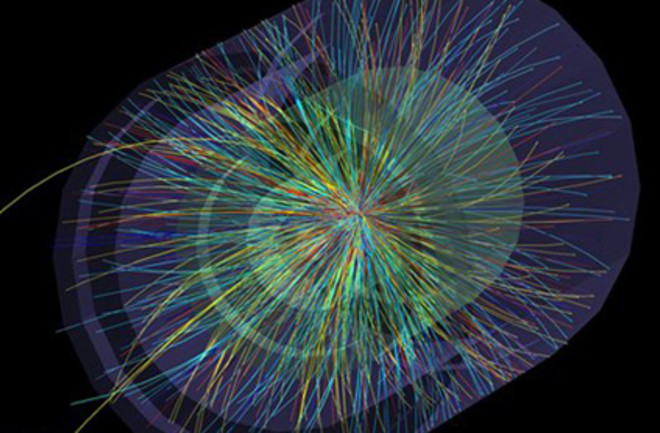 Now that the Large Hadron Collider is smashing lead, the discoveries are coming fast and furious. Earlier this month CERN's smashing machine switched from sending protons zinging around its ring to sending heavy lead ions at relativistic speeds. Those energetic collisions, the physicists now say, have allowed them to use the LHC's ALICE experiment to glimpse quark-gluon plasma, the "primordial soup" present just after the Big Bang.

During this time, the Universe would have been so hot and energetic that the particles making up the elements we know today were unable to form, leaving the constituents to float "free" as a primordial soup. Quarks and gluons were only able to condense into larger particles when universal energy conditions were low enough. Hadrons (i.e. particles made from quarks; including baryons like neutrons and protons) were only allowed to form 10^-6 seconds after the Big Bang. [Discovery News]

In addition to creating the plasma, the CERN experiments have also shown they have the ability to probe the jets of particles that stream away from an energetic collision, and those jets could hold hints about the beginnings of the universe

That effect is called "jet quenching

," and the imbalance appears when one jet must travel through more quark-gluon plasma to escape the collision area than the other:

If the collision happens near the edge of the soup, one quark only has to pass through a bit of soup to escape - that's the big jet. But the other, going in the opposite direction, has to travel through lots of hot dense exotic matter. It gets scattered around and loses lots of energy into the medium it is passing through. That's the "missing" second jet. [The Guardian]

Jet quenching was indirectly observed at Brookhaven National Lab seven years ago. But with the energies at LHC, the effect is so pronounced that physicists could see it directly. Seeing it directly could tell them more about how particles diffuse in the quark-gluon plasma, and thus, more about what the first tiny fraction of a second of the universe's life was like. The jet quenching find from LHC's ATLAS detector will appear in Physics Review Letters, but for now you can read it on CERN's website