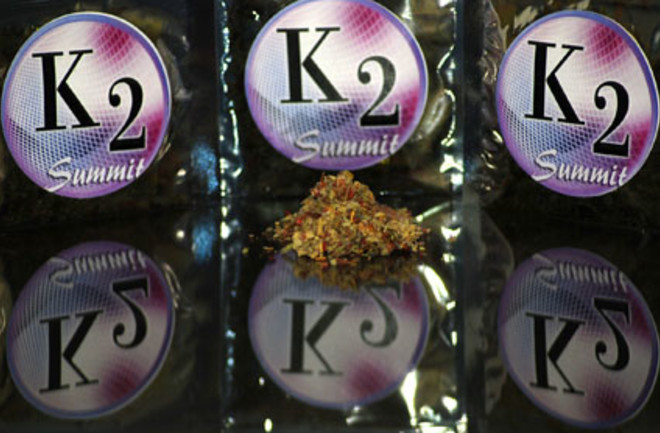 Around the United States, state governments are rushing to enact bans on K2, the hot new (and still mostly legal) drug made with synthetic cannabinoids: lab-created compounds designed to mimic the effects of THC, the active ingredient in marijuana.

Often marketed as incense, K2 — which is also known as Spice, Demon or Genie — is sold openly in gas stations, head shops and, of course, online. It can sell for as much as $40 per gram. The substance is banned in many European countries, but by marketing it as incense and clearly stating that it is not for human consumption, domestic sellers have managed to evade federal regulation [The New York Times].

Missouri is the most recent state to move against K2, the origin of which dates back to the work of Clemson University scientist John Huffman

, who was developing these synthetic compounds in the 1990s. Scientifically, the chemicals are interesting for their potential to mimic some of the pain-relieving aspects of marijuana, which advocates of medical marijuana legality point to, without the negative health effects that come with setting a plant on fire and inhaling the smoke. The chemical used in most varieties of K2 is called JWH-018. Huffman was interviewed by The Guardian

last year when K2 was spreading around Europe. Now in his late 70s, he seems to understand something that many politicians can't seem to get through their heads: Risk-taking teenagers will go to about any length, legal or illegal, to get high. Huffman says he wouldn't oblige the numerous enterprising types who asked him how to make his substances, and that the substances are always labeled not for human consumption. But he figured someone was going to figure it out sooner or later, especially considering the chemical doesn't show up on drug tests.

JWH-018 was "nothing special", Dr Huffman remembered, "but it was one of the more potent compounds we made, and it was quite easy to make from commercially available materials. Probably the reason it has now caught on.... My biggest surprise was that this all hadn't happened sooner," he told me. "All it needed was somebody with a reasonable understanding of science to see the papers we had published and think, 'Aha!'" [The Guardian].

The hurry to ban K2 this year started after U.S. health officials began blaming the substance for more and more hospital visits.

There has been a significant bump in calls to poison centers concerning spice. Nationwide, the American Association of Poison Control Centers logged 567 cases across 41 states in which people had suffered a bad reaction to spice during the first half of 2010. Just 13 cases were reported in 2009 [Washington Post].

But the problem health officials and politicians keep running into is that there isn't a single K2. What's probably happening is that dealers buy a synthetic chemical online and then spray it on their own mix of herbs and leaves. They sell the result as K2, marketing it as incense with a wink and a nod, although both parties know it's meant to be smoked. Thus, it's hard for medical responders to know what's making all these people sick: It could be the dose of the chemical, its stability during combustion, how it's metabolized, or something else in the mix. And if you're trying to ban the stuff, how do you do it? If state legislatures outlaw JWH-018, there are scores if not hundreds of other synthetics there to take its place. Texas legislators may attempt to draft a bill

that outlaws all possible synthetic cannabinoids, though how that wording will work is unclear. Related Content: 80beats: 1st Medical Studies on Pot in 20 Years Find It Does Relieve Pain

80beats: A Toke a Day Might Keep Alzheimer’s Away

More From Discover
The Sciences
Why Human Foreskin Is a Hot Commodity in Science
The Sciences
How to Donate Your Body to Science
Health
Mystery Cases: What Happens When Modern Medicine Lacks a Diagnosis or Cure?
Mind
Psychedelics Could Be the Future of Psychotherapy
Health
Researchers Are Getting Closer to Making Medical Robots That Can Swim In Your Bloodstream
Health
Are Thyroid Diseases on the Rise?
Recommendations From Our Store
My Science ShopCosmos: Possible Worlds
My Science ShopStrange Science
My Science ShopEinstein's Universe
My Science ShopElements Flashcards
Shop Now
Stay Curious
Join
Our List