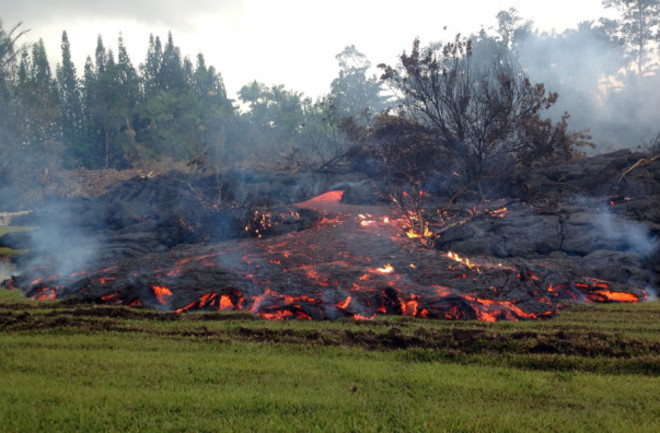 The lava flow near Pahoa on Hawaii, seen on November 2, 2014 as it approaches the town.

USGS/HVO The lava flows that has been slowly creeping towards Pahoa on the eastern slopes of Kilauea appears to have stalled out on the very edge of town. Since October 30, the lava flow has not advanced, but number of small breakouts have occurred the main front of the flow, especially where the flow has been able to pond and inflate. So far, the town has been spared the main brunt of the lava as it has snaked down the volcano. However, the debate about what could and should be done with a lava flow advancing on a populated area has reignited ... and it's a debate with a long history (of mostly failure). I've spent some time in this space talking about diverting lava flows. It is a tough proposition, mostly because lava is dense, hot and short of the eruption running out of lava, relentless. Some attempts have been made in the past to bomb lava flows to disrupt the flow fronts, but that didn't really stop the eventual continued front progress of the flow. Barriers or diversions have been built at places like Etna, with moderate success. However, one thing that happens at a diversion is the flow will inflate (see below) and if it inflates enough, it could breakout over the barrier. The flows inflate because the outer surface, which looks hard, is really somewhat plastic, so as lava continues to flow into the interior, the outer surface stretches like an inflating balloon. There is also the pesky question of whether it is legal or ethical to divert a lava flow (see below) from your property onto someone else's land.

A man-made barrier to divert lava near Pahoa, constructed by a private land owner. The lava flow inflated as it reached the barrier.

USGS/HVO One of the most successful attempts to stop a lava flow in its tracks was at Haimaey in Iceland during 1973. Lava flows from a new eruption threatened to overrun the town and close the invaluable fishing port for the settlement. The lava flows were finally stymied by a combination of barriers and an Olympian volume of water pumped onto the lava flows. This water was supposed to solidify the flow front to prevent any more breakouts that would head into the town or towards the port. This was only possible because Haimaey is right on the coast, so the astonishing 6 million cubic meters (1.6 billion gallons!) of seawater could be pumped directly onto the flow. Pahoa does not have this ready supply of vast volumes of water to stop the flow (although the flow is much smaller for the current Kilauea eruption). You can even look to fiction for idea of how to stop a lava flow. In Volcano, two attempts were made to stop the lava flows from the eruption of the La Brea Tar Pits (note: impossible). The first was more like what was tried at Haimaey, where barriers were set up before all the firefighters of Los Angeles hit the lava flow with water. It was obviously not enough (especially consider how hot that lava looks, moving as fast as it was down a flat street). The second, more dramatic attempt was to divert the lava flow from the subway tubes into a man-made channel that drained safely into the sea. The first idea was to dig a ditch connecting the two, but that didn't work so instead they set up a precision demolition of a large building in a matter of minutes (note: impossible) to act as a barrier and force the flow into the channel (see below).

The final successful (and fictional) diversion of lava in 1997's Volcano. The lava left the subway tube (as a lava fountain) and drained into the channel that brought it to the sea, thanks in part to a precision demolition of a large building to act as a barrier.

Volcano (20th Century Fox) That last ditch (no pun intended) effort actually worked and really, might be the best bet for Pahoa if it would be decided to divert the lava. Now, I don't mean blowing up a building, but if there was some way to dig a channel to get the lava to flow between buildings, parts of the town could be saved. There are some issues (beyond the moral reasons related to good relations with Pele). First, the flow has a wide front over 100 meters across. This means it would be hard to get all the flow and its branches (see below) into the same channel. Second, even if the flow was channelized, if the rate of lava being put into the flow increased, it could overtop the channel. Third, it might just take too long to build a deep enough and wide enough channel without enacting more damage to Pahoa than the flow would wreak.

The branching lava flow front near Pahoa in Hawaii, seen on October 31, 2014.

USGS/HVO Unfortunately, what this boils down to is that when you live on the slopes of a volcano like Kilauea, the chances that your house could be destroyed by a lava flow are real. This current lava flow is a bit of an anomaly as it travelled far downslope in channels and tubes before reaching the surface a long way down the Eastern Rift. However, that whole side of the Big Island is built on lava flows (like almost everything in Hawaii) and even if they might be thousands of years old, it doesn't preclude new lava flows. The dynamic landscape of volcanoes means that human structures are just as ephemeral as anything else that stands in the way of a lava flow.