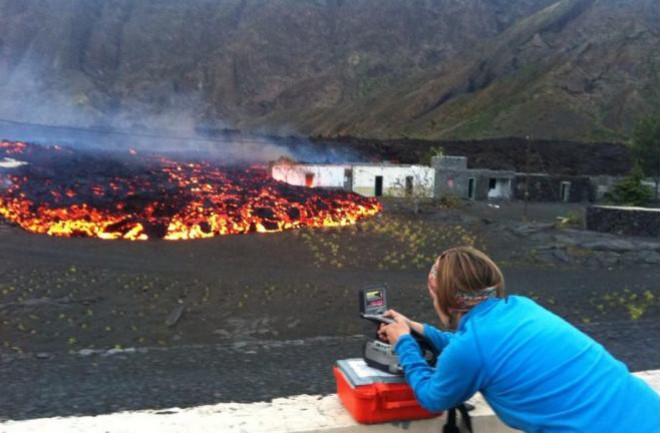 Monitoring lava flows from the Fogo eruption as they inundate towns within the caldera.

INVOLCAN, used by permission It is clear now that the ongoing eruption at Fogo in the Cape Verde Islands is not sparing the towns in the Cha de Caldieras area. There had been some indications that the eruption was slowing and that the town of Portello and Bangaeira could be saved, but as of December 8, it appears that much of the settlement is being overrun by lava flows and the lava continues to flow at close to 300 meters per day. The eruption regained vigor over the weekend, and the security teams near the volcano had to withdraw to safe distances. Close to 90 percent of the town is now covered by the lava from the new eruption (compare this to the lava during the recent Pahoa crisis in Hawai'i, which received many, many times more coverage in the mainstream media). Right now, close to 1,200 people who had to evacuate likely do not have a home to which to return. Even if their home survived, much of the infrastructure for these communities has been decimated as well. Not surprisingly, online charities have sprung up to help the people permanently displaced by the Fogo eruption. INVOLCAN filmed some stunning moments of lava flows moving through the towns (see above) and new images from Google Earth show the extent of lava flow inundation on the area ("alacance" on the linked image). Volcanologists following the eruption have said that the current activity could last as long as the 1995 eruption that lasted 56 days, so we could see many more weeks of lava flows within the Fogo caldera, creating a massive humanitarian crisis for such a small, isolated island.

Lava flows from the Fogo eruption covering the towns of Portello and Bangaeira.