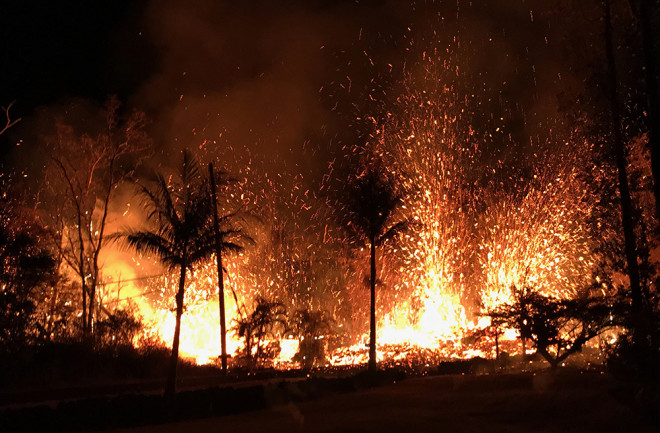 Lava fountains from the new fissure eruption at Leilani Estates on Kilauea, seen on May 5, 2018. USGS/HVO. The new eruption far on the East Rift zone of Kilauea is continuing. The latest count has at least 10 fissure vents erupting (see below) on the east side of Leilani Estates and more cracks in the ground, some releasing copious sulfur dioxide gas. The lava flows coming from the fissures vents that are intermittently erupting has destroyed at least 5 homesUPDATE: destroyed up to 31 homes and lava fountains reached as high 70 meters (215 feet) -- you can watch some of the impressive footage of the eruption below. All of the Leilani Estates subdivision has been evacuated with little idea when residents might be permitted back into their homes. UPDATE 8:00 PM EDT: ABC News just tweet some stunning video of the eruption today. Long lava flows and lava spattering from the fissures -- right in the middle of neighborhoods. Amazing and tragic.

Incredible footage shows the lava flow during this morning's fissure eruption on the east side of Hawaii's Big Island. More than 1,800 residents have been evacuated from their homes. https://t.co/c4jmm3rMcvpic.twitter.com/aMEtfEHnmF

Lava flows blocking the road in Leilani Estates on Kilauea, seen on May 5, 2018. USGS/HVO. UPDATE:The lava flow from fissure 8

(see map below) has now travelled over 1.2 kilometers and more steaming cracks have opened near fissure 8 and 9.

A thermal map of the a'a' flow moving north from fissure 8 at 2:30 pm on 6 May. White areas are hotter temps. #LeilaniEstates#Kilaueahttps://t.co/8Y4gPq7VSYpic.twitter.com/nCge8641pS

In some of the most stunning video, you can see a fissure erupting in the middle of an area of homes. These vents could be active for weeks-to-months, so many of these homes could be inundated with lava. This part of Hawaii is by no means wealthy, so the stakes are high for the people who live in Leilani Estates -- many of which may not be able to just "pick up and leave"

from the Suomi-NPP satellite, spreading to the southwest of the eruption.

The USGS is doing a great job providing updates on the eruptions in Leilani Estates https://t.co/zFD6WdMEiL also follow @USGSVolcanoespic.twitter.com/FeX2PZtscL

Up at the summit of Kilauea, the floor of the Halema'uma'u Caldera has dropped 10 centimeters

as seen a drop of 128 meters (518 feet) in a little less than a week! All the eruptions at Pu'u O'o have ceased, including the formerly active 61g lava flow field, so it seems that the most active part of the volcano is the new Leilani Estates eruption, at least for now. UPDATE: As of Monday May 7, the summit lava lake had dropped 220 meters (722 feet) at an astonishing 2 meters per hour! This eruption is reminiscent to the 2014 activity at Fogo

in the Cape Verde Islands. That island hotspot volcano (much like Kilauea) produced lava flows that destroyed multiple towns

. Lava flows are nearly unstoppable as a volcanic hazard, with only some success in diverting flows at Heimaey in Iceland during the 1973

and around Etna in Italy

. In all cases, people were able to get out of harm's way, but structures were destroyed by the advancing lava.