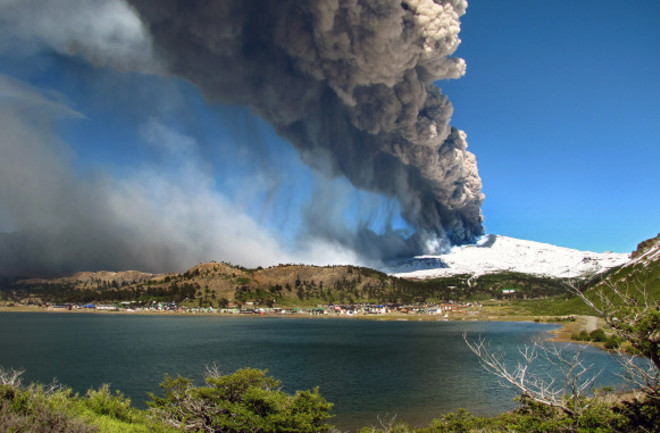 View of the Copahue volcano spewing ashes behind the lagoon of Caviahue, Neuquen province, Argentina. AFP/Getty Images This fall has been rather quiet in terms of large, attention-grabbing eruptions (which is in contrast to some falls that have helped boost the hypothesis of a "volcano season" phenomenon). Here's an update on some of the activity in Latin America right now: Ecuador All eyes have been on Ecuador's other currently restless giant at Cotopaxi. However, Tungurahua is just as hazardous and much more active than its volcanic cousin. Explosions from Tungurahua produced ~2 kilometer (6,500 foot) ash plumes this week. Tungurahua is further from Quito than Cotopaxi, but is within 35 kilometers of Ambato and Riobamba. Meanwhile, Cotopaxi continued to rumble producing an ash plume similar to Tungurahua, and recent rains generated a small lahar (volcanic mudflow) on the slopes of the volcano as newly erupted ash was remobilized. It has now been 60 days since the eruptions at Cotopaxi began, so the state of emergency placed on the area will need to be reevaluated by Ecuadoran officials. Perú Heading further south along the Andes, Perú's active volcanoes were also producing small ash plumes. At the end of September, Ubinas churned out a ~4 km (13,000 foot) ash plume that was captured on video. This was one of the largest explosions that the volcano has produced during its current restless period. If this new explosion is a sign that the volcano might be headed towards more violent eruptions, then the ~600 families who are still living near Ubinas will likely have to be relocated. Currently, Ubinas is emitting a ~1.5 km (5000 foot) ash plume that has impacted towns to the south. Geologists from the

Observatorio Vulcanológico del Sur in Perú also visited the crater area at Sabancaya and found an impressive amount of degassing. In the video you can see the ash and volcanic blocks that have accumulated on the slopes from explosions at the volcano---and some of those blocks are a few meters in length. The fumaroles where volcanic gasses are being released are nearly 400ºC (750ºF). Sabancaya is experiencing ~150 earthquakes per day related to rock fracturing as magma moves under the volcano.

Guatemala A new eruption at Fuego began last week and lava flows are still moving on the slopes of the volcano. However, only the region close to the volcano has been affected, so no evacuations have been called during this bout of restlessness. Fuego is in its ninth year of eruption and the activity waxes and wanes, likely due to changing supply of magma from its source below the volcano. The currently activity is Strombolian, meaning large gas bubbles are generating explosions at the summit along with lava flows as the magma reaches the surface---very similar to what we see at Etna in Italy regularly. Watch a time-lapse of the current eruption at Fuego to see the eruption in progress. Each of the bursts is a large gas bubble reaching the surface and popping, sending blobs of lava as far as 200 (650 feet) meters from the crater. Colombia The biggest threat in Colombia right now is still from Nevado del Ruiz. The volcano in central Colombia has been restless for a few years now and occasional outbursts have dusted ash on Manizales and Pereira. Steam-and-ash columns regularly reach almost 2 km (6,500 feet) over the volcano while seismic activity remains high, suggesting magma still moving into the volcanic system beneath Ruiz. All of this means that Ruiz remains on a Yellow Alert status. You can read (in Spanish) all the excellent updates that the SGC provides for Colombia's many volcanoes. Chile The southernmost Andean nation is surprising quiet right now. Currently, SERNAGEOMIN only has two volcanoes on elevated alert status: Villarrica and Copahue. The ash plumes from Copahue has impacted towns around the volcano. Although the plume has been relative small, only reaching 400-500 meters (1300-1500 feet), it is especially ash rich, so when the winds are blowing the right directions, the ash can fall on towns and farms around Copahue. However, the slow decrease in activity means that the SERNAGEOMIN lowered the alert status at Copahue from Orange to Yellow over this past weekend.