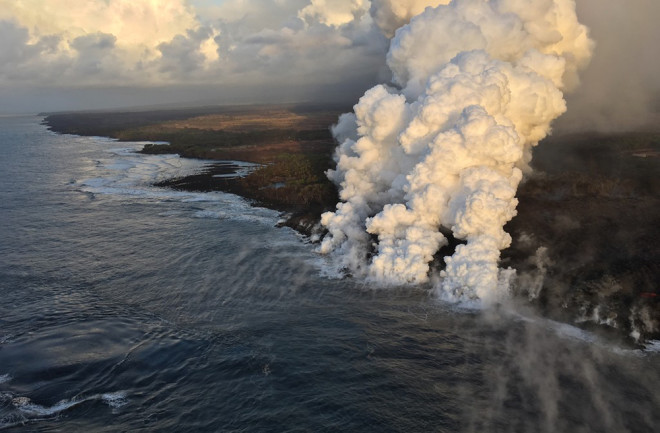 The ocean entry from the Fissue 8 eruption in the lower East Rift zone of Kīlauea, seen on July 15, 2018. USGS/HVO. News out of Hawaii today is that we have had one first major injury event related to Kīlauea's ongoing lower East Rift Zone eruption. A tour boat sailing near the ocean entry from the Fissure 8 lava flows was struck by volcanic debris thrown by an explosion, injuring at least 23 people and tearing a hole through the roof of the boat (see below). The boat was apparently outside the 300 meter safety zone near the ocean entry (although some news reports say the boat was only 180 meters away), meaning that these explosions are throwing large lava bombs and blocks further than that!

#LeilaniEstatesEruption #KilaueaVolcano UPDATE (July 16 at 9 AM): Unbelievable footage from @IkaikaMarzo's crew on board the @KalapanaCulturalTours lava boat captures the lava explosion that sent lava bombs (lava rock and debris) flying into the air, which landed on a tour boat that was operated by Shane Turpin. The Hawaiʻi County Fire Department has just confirmed 12 passengers were injured. We are told three people were taken by ambulance to Hilo Medical Center. Two passengers (no details on gender or age) were in stable condition. One, a woman in her 20s, is in serious condition with a fractured femur. The remaining 9 passengers drove themselves to the hospital, and the Fire Department reported their injuries were not as serious. Hawaiʻi County Fire officials say a lava bomb punctured the roof of the boat, leaving a large hole. One of the railings of the boat was also damaged. The lava tour boat returned to Wailoa Harbor in Hilo and docked near Suisan around 7 AM. #HawaiiNewsNow has learned that the state Department of Land and Natural Resources is taking the lead on this investigation, which will involve the U.S. Coast Guard as well as the county. It's unclear how close Turpin's tour boat was to the Kapoho lava ocean entry when the explosion happened, but eyewitnesses report the boat appeared to be "very close". On July 11, the Coast Guard changed their mandatory safety perimeter zone around ocean entries (Kapoho and Kalea) from 100 meters to 50 meters for licensed lava tour boat operators. I spoke with #IkaikaMarzo, who says he was consulted about the change, but disagreed with it — saying he believed it was unnecessarily close. All other mariners, without explicit written permission from the Captain of the Port of Honolulu, are required to observe a mandatory 300 meter safety zone around all active lava entry point. Stay tuned to @HawaiiNewsNow for the very latest developments! As soon as I have more information, I’ll update you. #HInews #HawaiiNews #HNN #WeAreYourSource (Images courtesy @IkaikaMarzo) A post shared by Mileka Lincoln (@milekalincoln) on Jul 16, 2018 at 12:09pm PDT

When lava and water interact at an ocean entry, explosions can happen as the water quickly flashes to steam and fragments the lava. This can throw material hundreds of meters into the air and it appears that this debris is what damaged the tour boat. This is exactly why the U.S. Geologic Survey recommends that people stay far away

from ocean entries -- they can be unpredictable and hazardous, both from the flying debris but also the vapor ("laze") that can form as the water evaporates due to the high heat of the lava. As the eruption has continued, tourism has increased

from people wanting to see the lava as it flows across the lower East Rift and into the Pacific Ocean. This is problematic both in terms of safety for those tourists and out of respect for people who have lost their homes and livelihoods in the eruption. The only other lava-related injury

so far was early in the eruption when a bomb thrown from a fissure landed on the porch of a home, breaking the leg of the home owner.