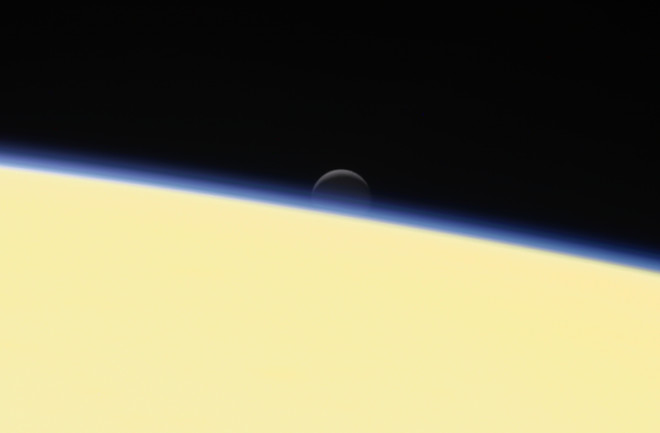 Enceladus setting behind Saturn, as seen on September 13. This is one of the final images from Cassini. Data from the mission revealed that Enceladus has an ice-covered ocean that could potentially support life. (Credit: NASA/JPL-Caltech) The death of the Cassini spacecraft marked the end of an era--not just the end of a mission, but the end of a whole style of exploration. Cassini was a multi-billion dollar probe, a versatile scout in the style of the Voyager and Galileo probes. It bristled with instruments that allowed it to take the measure of every part of Saturn's staggeringly complex system of moons, rings, clouds, and magnetic activity. As Cassini's program manager and a veteran of the mission since 1993, Earl H. Maize of the Jet Propulsion Laboratory has a unique perspective on the last days of this remarkable spacecraft. There is no other comparable mission on the drawing boards; given current political realities, there may not be another like it in our lifetimes. And yet, Cassini is a beginning as well as an end. Maize notes that omnibus missions like Cassini allow more targeted follow-ups, like the upcoming Europa Clipper and (here's hoping) future visits to the moons Enceladus and Titan. I spoke with Maize just ahead of Cassini's heroic final plunge. He offered an insider's view of how it all ended: a story of pride and scientific triumph much more than one of sadness. [For updates and other science news, follow me on Twitter: @coreyspowell] Tell me about Cassini's last minutes. What was the plunge into Saturn like, both for the spacecraft and for the Cassini team back on Earth? Maize: The spacecraft is fighting to stay pointed at the Earth. And we’ve got some very very tiny thrusters trying to hold its attitude to keep that almost pencil-width beam at the Earth. As we get deeper and deeper into the atmosphere, the thrusters get overwhelmed and the spacecraft--because it’s not perfectly symmetrical--turns away from Earth. At that point we lose communication. On Earth, we see a signal that’s quite strong and fails quite quickly, in a matter of seconds, from a strong carrier to absolutely nothing. It's just a matter of seconds before we lose point. That is the end of the spacecraft communication. [The X-band signal disappeared at 11:55:39 UTC and the S-band lasted until 11:55:46, within half a minute of the predicted times.] We have telemetry that’s being processed through the computer, so for a few seconds longer we continue to see data, but that data has all been previously received.

Earl Maize waits intently for a confirming signal from Cassini at the start of the Grand Finale orbits in April. (Credit: NASA/JPL-Caltech/Bob Paz) What was happening to Cassini after we lost contact? Maize: Back on Saturn it's just a few minutes before the spacecraft is completely disassociated and vaporized. It’s going so fast [112,000 kilometers per hour] and the atmosphere is thickening so quickly that it's just like a meteorite at Earth. It doesn't burn in the classical sense, because we don’t have oxygen in Saturn's atmosphere. It's just totally vaporized. First, some of the hardware starts to melt. As soon as Cassini start to lose electrical continuity to the antenna--and most of that hardware is exposed--we lose the radio signal. So there was never much of a chance of us picking up something as it tumbles, with another signal or pulse coming back [although the S-band radio signal did briefly disappear and return as the thrusters fought for control]. At what altitude did Cassini break apart? Maize: Saturn is of course a ball of gas that doesn’t have a surface, so we’ve defined the ‘surface’ on Saturn as the 1-bar pressure level that’s the equivalent pressure of sea level on Earth. About 350 kilometers above that 1 bar level on Saturn things are so intensely hot for Cassini that there isn't much left. For comparison, 350 kilometers is about the level that the International Space Station travels at [above Earth's surface], and it experiences some drag. By the time we’re at that level on Saturn we are so hot, everything has just totally vaporized. This was a unique opportunity for Cassini's science instruments. What were you studying on the way down? Maize: The most dramatic data comes from our ion and neutral mass spectrometer. It samples the atmosphere and breaks it apart into its various constituents. We repurposed Cassini into a Saturn atmosphere probe to make this work. Cassini normally recorded everything onto its tape recorders; it couldn't point the antenna and gather data at the same time, so it threw data on its recorders and played it back later. What we did was put Cassini in a new position so that as the spectrometer gathered data, it put it on the recorder and spat it right back out onto the antenna. We kept the spectrometer pointed into the incoming atmosphere so that we got as rapid a response as we can. The spectrometer was sampling the atmosphere, breaking it apart, and sending back data packets every second until the very last second. Along with that instrument, all our other instruments--our magnetometers, imaging magnetometers, our plasma wave and dust detectors--were also be engaged, as was the radio science instrument. So there was science down to the very last second from everything we can use. We didn't have enough bandwidth or data capacity to store and send images, though. That why there was no imaging [on the way down]. You actually started dipping into Saturn's atmosphere and collecting atmospheric data earlier, during the final orbits. How did that work out? Maize: The last five orbits were pretty cool! That was a real Cinderella story --no, wrong story, it was more like Goldilocks. We had a Titan flyby a few weeks ago that pushed us close enough to the atmosphere that Cassini could potentially sample it. But we didn’t know if we’d be too close, in which case the spacecraft couldn’t handle it, or too far, in which case the instrument wouldn’t be able to pick up any atmosphere. It turned out we were right smack in the middle, in the Goldilocks zone. We weren’t too deep, so the spacecraft could easily handle the pushing and pulling of the atmosphere, and we weren’t too high, so that the instruments couldn’t get any material. The last five orbits were just perfect atmospheric sampling orbits. Of course, the the final orbit went really deep!

Cassini's point of entry, as imaged just hours before impact by its visible-light and infrared cameras. The spacecraft's atoms are now scattered across Saturn. (Credit: NASA/JPL-Caltech) What will we learn from Cassini's final dips into Saturn's atmosphere? Maize: We’ll be measuring the hydrogen-to-helium ratio. It’s a very important ratio relative to the formation of the solar system, and has a lot to do with how Saturn evolved. We’ve been finding a lot of other interesting [structures] in the atmosphere, and we’re trying to get a good profile of those as well. At our entry point, at 10 degrees north latitude, we got a good density profile before we lost contact. There was an early Cassini concept in the 1980s that included an atmospheric probe. It never got built--but you turned Cassini itself into the atmospheric probe in the end! Maize: Yeah, back in those days we were adding everything we could [to the Cassini concept]. Unfortunately, that became too expensive, which is part of what got us into [financial trouble] in the early 1990s. But the original concept always had a Titan probe on it, and that part survived. After Voyager, we knew that we had to go back to Titan and figure out what’s going on there. There’s a huge thick atmosphere. We had more focus this time, and hopefully we’ll go back to Titan again with an even more tactical approach.

One of my favorite Cassini images, showing the razor-thin rings and hazy, carbon-rich moon Titan. It beckons to us to return. (Credit: NASA/JPL-Caltech) Cassini's propellant tanks were almost empty. Did you worry about running out before the planned end? Maize: For the last year and a half, every time we burned the engines we had a plan for what we’re going do if the propellant ran out. We were pretty lucky to have gotten this far. But after our last maneuver past Titan several weeks ago [which sent Cassini on its collision course] we didn’t have to adjust the trajectory at all. It was what we call "untargeted," which means we just take what we get, thank you very much. From our perspective, Cassini's entry point was just about noon on the planet, with the sun just about overhead. Or just over Australia on Earth. That was perfect for a lot of reasons. It meant that the Doppler signal from the radio science observation was perfectly aligned with the Earth as it could be. That was something we tried very hard to maintain [when setting the trajectory]. And of course we were pointed at the Canberrra tracking station, where everybody was at the ready to receive the final signals. Lots of people on the team have talked about the clashing emotions when Cassini was over. What was it like for you? Maize: Depending on what you had for breakfast, you can wake up feeling really sad and emotional about the loss of the mission, or you can feel like, "We went out in a blaze of glory, we used up everything in the system and we’re done and we have nailed it." Right now I’m feeling like, we nailed it! There’s just so much this mission has accomplished, and to finish up with resources empty and having done as much as we have, I feel a great sense of pride. Oh, I’m going to feel a little alone. We’ve had an extension a billion miles away for the last 20 years, and now we don’t. But we’ve used every part of that system as well as we could. Any other kind of ending where it slowly faded away wouldn't have been right. We had our requirements--we had to protect Enceladus, and to a lesser extent Titan [from possible contamination by the spacecraft]. And we got to go in and explore a place we never would have dared explore any other time. I can’t think of a better capstone to this mission. I wouldn’t be surprised if Cassini’s legacy goes for a couple decades. Not just its legacy in terms of data return, but in terms of how it’s reshaped the thrust of the outer-planet program. We’re all a lot smarter in terms of what to look for next. Thank you for sharing your insights and feelings about the mission. Maize: My pleasure. You can’t shut me up about my favorite subject!