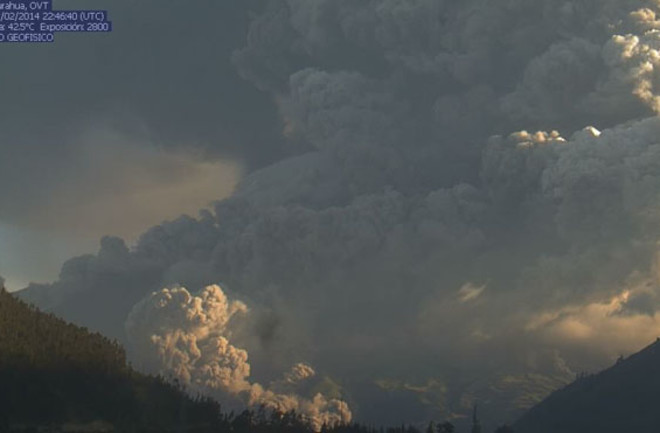 Explosive eruption at Tungurahua in Ecuador on February 1, 2014. Image: IG-EPN webcam capture. February is off to a roaring start ... another brief post to direct you to the significant explosive eruption (see above) going on right now at Ecuador's Tungurahua. You can see the eruption right now on the IG-EPN webcams and it looks like both an ash column and pyroclastic flows heading towards the Chambo River being generated. I don't know what precautions are being taken right now at Tungurahua, but I imagine people close to the volcano will need to get out quickly. Explosions earlier today reached at least 2.5 km / 8,200 feet, but the activity right now looks worse. Tungurahua had been experiencing heightened earthquake activity for the past few days. UPDATE: It appears that pyroclastic flows are crossing the road at Los Pajaros. UPDATE 7:15 PM EST: Some reports are now putting the ash plume height at 10 km / ~32,000 feet while the Washington VAAC advisory mentions ash as high as 14 km / 47,000 feet. According to the official IG-EPN report, pyroclastic flows apparently moved down the slopes of the volcano in all directions as well. One of our Geoscience majors is in Quito for the semester to study abroad and he mentioned to me he would be in Baños, near Tungurahua, this weekend, so I'm especially concerned about this new massive explosion. It appears that some towns near the volcano were evacuated prior to this new activity. I will update with more news as it arrives.