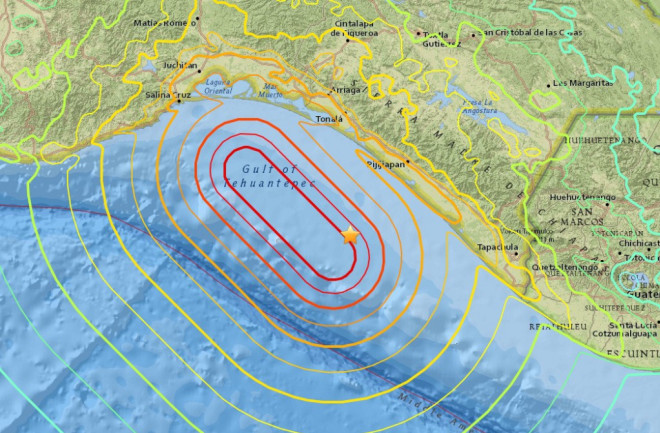 Map of the epicenter (star) and modeled shaking intensity for the M8.1 Pijijiapan earthquakes on September 7, 2017. USGS. One of the largest Central American earthquakes ever occurred last night off the coast of Mexico and Guatemala. The USGS estimates it was a magnitude 8.1 that ruptured about 70 kilometers off the shore, with the city of Pijijiapan closest to the epicenter. At least 32 people have died (the death toll now looks to be at least 58) in the earthquake so far according to early reports.

Now, earthquakes are not uncommon on the western coast of Central America. Jascha Polet (Cal Poly-Pomona) posted some images of historic seismicity in the region and there are LOTS of earthquakes. Very few are as large and occur as deep as last night's temblor, but there is lots of seismicity along this coast.

However, the magnitude and depth weren't the only thing odd about this earthquake. Most earthquakes in an area like this where two plates are colliding and one is losing (i.e., being shoved down into the Earth's mantle) are compressional. However, if you look at the beachball* (aka moment tensor)

for this earthquake, it has normal motion -- that is, the fault was showing extension rather than compression. A long stretch of the fault appears to have moved as well, as the most intense shaking appears along a strip

that runs over 100 kilometers (62 miles) along the coast. * Curious about earthquake beachballs? Check out Chris Rowan's primer

. Also, Mexico City felt a lot of shaking ... and it is 750 kilometers (~470 miles) from the epicenter. In fact, some places closer to the epicenter felt less shaking than Mexico City. You can kind of see this in the USGS Shake Map for the earthquake

. Now, this likely has to do with the material underneath the city. Sediment (like we find in the valley were the city is built) will tend to jiggle with an earthquake ... or hard rock will transfer seismic waves long distances, like what happened in the Virginia earthquake of 2011

. Maybe a combination of this caused the intense shaking felt in Mexico City (see below). The city had over two minutes warning after the earthquake occurred before the seismic waves that cause shaking reached there, so it is a great example why building "early warning" systems (the siren in the video below) for earthquakes could be vital for many cities.

, which was a bit of a surprise considering the depth of the earthquake. The tsunami was 1-3 meters on the Mexican and Guatemalan coasts

. However, it did prompt marine tsunami warnings as far as New Zealand

as the waves generated by this earthquake raced across the Pacific Basin, where the tsunami is potentially 0.3-1 meter in places like Fiji and the Cook Islands. If you want to get into the details of the earthquake, please check out Callan Bentley's post

. NOTE: Before anyone goes there: there is no connection between the hurricanes and this earthquake. They are totally unrelated. Earthquakes happen at a nearly random distribution

, so don't believe any crock about anyone "predicting" this earthquake due to planetary alignment, the moon, bunions or whatever. And no, the Earth isn't more active