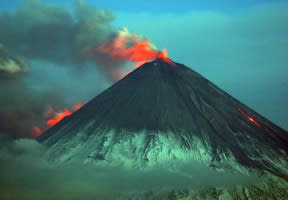 Reports from Russia indicate that Klyuchevskoy, Russia's largest volcano, is erupting. It sounds like it might not be just a murmur as Alexei Ozerov from the Institute of Volcanology and Seismology of the Far Eastern branch of the Russian Academy of Sciences says the volcano is spewing ash, rock and gases. No real details on how tall the eruption column is, but the report mentions a hazard to aircraft in the area, which would suggest that the column is at least in the 3,000-5,000 meter range. Klyuchevkoy is part of the Kamchatka volcanoes in far east Russia and last saw a major eruption in 2007 (see picture above). Last month there were brief mentions of increased signs of activity at the volcano, and this sounds like they were, indeed, leading to an eruption.