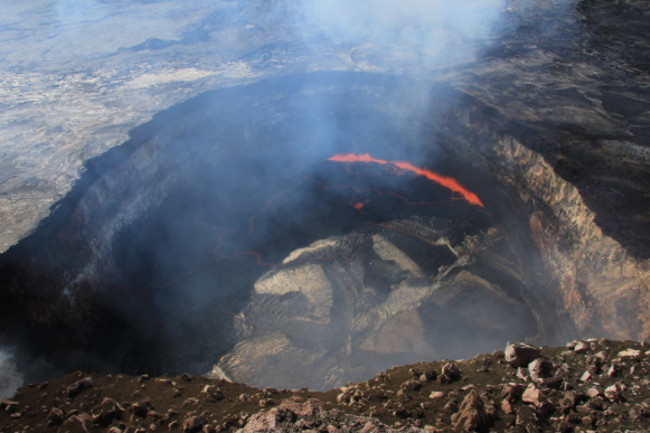 The Halema'uma'u lava lake level at Kilauea on May 15, 2015. The level dropped over 60 meters from where it was early in the week when lava flows were issuing from the lake onto the pit crater floor. USGS/HVO For the last few weeks, we were all watching the overflowing lava lake at the summit caldera of Kilauea. Last week, the lava lake levels dropped precipitously, ending the lava flows that were repaving the pit crater floor. That could have been the end of the activity, but over the past few days, an earthquake swarm has been rumbling at the Hawaiian volcano. Most of the earlier earthquakes where under the main summit and the active East Rift Zone (ERZ), where lava flows are common today (and is the home of the Pu'u O'o crater vent). These new earthquakes are now focussed mainly under the southern part of the volcano's summit and the quiet Southwest Rift Zone (SWRZ). The Southwest Rift Zone (see below) is likely unfamiliar to many Kilauea-watchers. It has been silent since 1974, long before the recent 30+ year run of eruptions from Kilauea that has been spread from the summit to the ERZ. That last eruption from the SWRZ followed the impressive sequence on the ERZ that included the Maunu Ulu eruption. That eruption on the SWRZ was relatively brief, but very intense as lava appeared to exploit some existing faults to erupt. That 1974 eruption on the SWRZ was also preceded by a vigorous earthquake swarm and inflation in the upper part of the SWRZ, just like Kilauea is experiencing right now. This is all part of the complex eruptive history of Kilauea as the shield volcano grows on the edges of the big island of Hawaii.

Map of Hawaii's Kilauea, showing the SWRZ and ERZ. USGS/HVOInflation has occurred before along the SWRZ without a new eruption, but this combination of events -- the earthquake swarm, the inflation and the rapid draining of the lava lake -- has USGS geologists thinking we might see the reactivation of the SWRZ. The most recent Kilauea status update offers three potential scenarios: no eruption (still the likeliest scenario), eruption on the upper parts of the SWRZ near the summit and eruption further down the SWRZ if magma underground migrates through Kilauea's magmatic system. Watching the earthquakes locations can help understand where that magma is moving. If any eruption in the SWRZ is in the works, it could start within days (or take much longer), but the first sign will likely be fissures opening and the release of copious volcanic fumes (mostly water, carbon dioxide and sulfur dioxide). That is the same sequence that occurred before the Kamoamoa Fissure eruption in 2011 on the ERZ. So, keep a close eye on Kilauea. It has been over 40 years since the SWRZ erupted, so if a new eruption starts there, it is a significant change in Kilauea's behavior compared to the last 32 years of activity on the summit and ERZ.