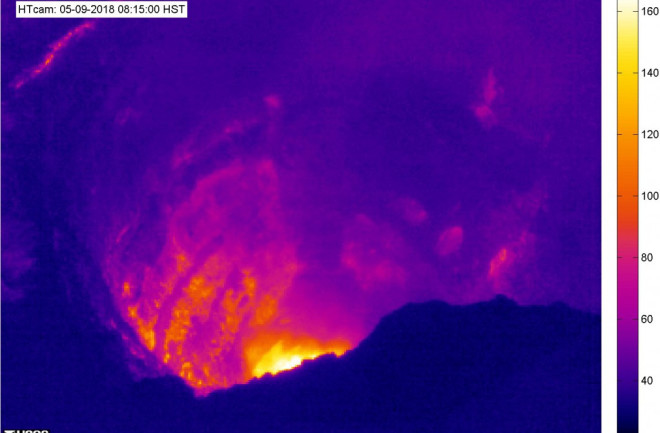 Thermal camera image of the dropping summit lava lake at Kilauea, seen on May 8, 2018. USGS/HVO. So far, the new Leilani Estates eruption on Kilauea has been run by the usual playbook of the volcano: fissure, gas release, lava fountains and lava flows. This style of volcanism is called "Hawaiian" for a reason! However, Kilauea isn't always a volcano that erupts lava flows that ooze out over the landscape. Occasionally, the volcano will become more explosive. The Hawaii Volcano Observatory issued an update today that the continued drop in the Halema'uma'a lava lake level (now over 200 meters in 7 days) might put the volcano in a situation where we could get explosive eruptions from the summit. The last time this happened was back in May 1924 and Kilauea produced an eruption that threw volcanic debris kilometers from the summit and an ash plume that reached 3 kilometers (~10,000 feet) up. Another explosive eruption in 1790 produced a plume that may have reached ~9 kilometers (30,000 feet) -- that's a proper Plinian eruption from a shield volcano! That eruption killed a number of native Hawaiians and is one of the few historic eruptions at Kilauea to kill people.

Detail of explosion from Halemaumau at Kīlauea Volcano as viewed from Uwēkahuna Bluff, 11:20 May 18, 1924. USGS/HVO So, if Kilauea erupts basalt that is usually runny and makes lava flows, why did it go all explosive? You can generate explosive eruptions two ways: with water dissolved in the magma that gets trapped to make bubbles that burst or when you add water into a magma near there surface to create big steam-and-lava eruptions. At Kilauea, it is the latter than causes these phreatomagmatic eruptions (as they are called by volcanologists). As the lava lake level at the summit drops, there is a chance that the level will reach the groundwater table under Kilauea's summit. If that happens, the groundwater could interact with the lava and produce these steam-and-lava explosions like what happened in 1924 and 1790. The biggest issue here is that phreatomagmatic eruptions rarely offer any warning signs like earthquakes or deformation -- they just occur when the water and magma meet. This means it could be an especially high hazard for people working near the summit of Kilauea. This type of eruption is what killed the tourists on Japan's Ontake in 2014. Scientists at HVO have their work cut out for them right now, with the ongoing eruption at Leilani Estates still producing new fissures and now the potential that the summit might produce something more explosive. Let me emphasize: this is not a given and no explosive eruptions could happen. However, the chances are higher now that the lava lake level is dropping.