Kepler Spacecraft's Successors Are Lining Up to Find Another Earth

Don't cry for the crippled Kepler space telescope — it was always meant to be the first word in planetary discovery, not the last. 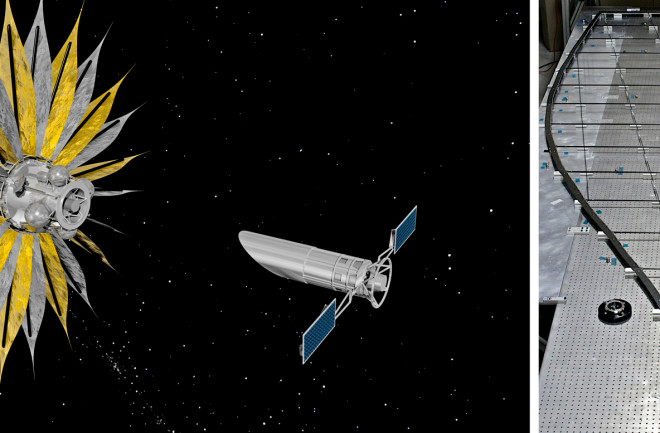 A proposed mission to find other Earths will use a petal-shaped shade (left) to block starlight that would otherwise obscure the planets. A prototype version (right) is being tested. | NASA/JPL/Caltech

After four years of searching for new worlds — discovering 164 planets and finding hints of at least 3,500 more — the Kepler space telescope was brought down on May 15 by a couple of faulty ball bearings. Without those bearings, the spacecraft lost its aim, and Kepler’s prime planet-hunting days came to an abrupt end. For Bill Borucki, who had championed the mission since the 1980s, it was a deflating and humbling moment.

Why, then, is this man smiling?

“Oh, I have a feeling of satisfaction,” says Borucki, an astronomer at NASA’s Ames Research Center, in his distinctive soft voice. “The worry before we launched was that there were very few planets. That’s not true. We’re finding lots of planets of all sizes, including planets that may be full of life. We’re about to accomplish our objectives. So I’m just delighted.”

One of Borucki’s most important goals was that Kepler should be the first word in planetary discovery, not the last. It was designed to get the big-picture view of what is out there, akin to the expedition of Lewis and Clark, and in that regard it has been a staggering success. Kepler’s statistics indicate that our galaxy contains up to 300 billion planets. That’s almost a thousand worlds for every person in the United States, plenty of targets to keep future explorers busy.

The first of those explorers — TESS, the Transiting Exoplanet Survey Satellite — is scheduled to launch in 2017. Following a novel, looping path that gives it an unobstructed view, the orbiting TESS will scan the sky for planets around nearby bright stars. And sometime next decade, revolutionary imaging technology now in development could bring home the ultimate prize: a direct look at another planet exactly like Earth. No wonder Borucki is in such high spirits.

Seeking the best and brightest

The first successor to Kepler will be … Kepler itself. The telescope may be crippled, but its data archive, nearly 1 terabyte of information on 150,000 stars, remains full of undiscovered treasures. Borucki and his team keep developing better ways to filter out background noise and extract signals they missed before. “It’s surprising how many more planets we find every time,” he says.

Kepler may take on new tasks as well. It remains a capable space telescope, albeit one with a bum leg. NASA is sifting through 42 proposals of what it could do next, possibly even including different kinds of planet searches; the agency should decide by April whether to grant funds for Kepler 2.0.

But the next real advance in planet-hunting will be TESS, which will correct for Kepler’s most frustrating limitation: It was a little too good at its job. To get a complete picture of all the planets out there, Kepler looked at a huge number of really faint stars to make sure it didn’t miss anything. Most of these stars are so faint, and their planets so distant, that no other telescope can follow up to study their potential for life. So where Kepler went narrow and deep, its successor goes shallow and wide, seeking out only nearby planets around bright stars. Like Kepler, TESS looks for transits — the subtle shadows that sweep across a star as a planet passes in front. But TESS is deliberately biased in which kinds of stars it monitors.

“Kepler is a statistics mission; TESS is a cherry-picking mission,” explains the Harvard-Smithsonian Astrophysical Observatory’s David Latham, the TESS science director. “It will put special emphasis on stars smaller and cooler than the sun, because any planets orbiting such stars will be easier to detect, confirm and characterize. It will find all of the targets that people are going to be working on for the next 10, 20, 50 years.”

That approach also keeps TESS quick and inexpensive. The $200 million mission will follow a “stare and move” strategy, similar to the way you can knit together panorama views with digital cameras. TESS will point its four telescopes in one direction for 27 days, turn, point in another direction, turn again, and so on. Kepler covered just 0.28 percent of the sky. In just two years, TESS will map nearly everything.

A proposed mission to find other Earths will use a petal-shaped shade (left) to block starlight that would otherwise obscure the planets. A prototype version (right) is being tested. | NASA/JPL/Caltech

Then other telescopes will fill in the details. TESS is specialized to detect planets, not to reveal much about their nature. But TESS will launch right around the same time as the James Webb Space Telescope (JWST), the supersized successor to Hubble. “We’ve designed the mission to find the best targets for JWST,” Latham says. TESS’ big brother will have the power to measure the temperature and composition of many of the TESS planets — even to monitor their weather.

Meanwhile, enormous ground-based observatories like the Giant Magellan Telescope in Chile and the Thirty Meter Telescope in Hawaii, both scheduled to open their eyes around 2020, will perform the more time-consuming work of measuring the masses and densities of the planets found by TESS to determine whether they are rocky objects, gassy ones, or something else entirely.

“What we really want to do is image planets directly. We want to find the ones that are truly like Earth, and we know how to do it now,” says Sara Seager of MIT, a member of the TESS science team and recent recipient of a MacArthur Genius Grant. That is what NASA’s Exoplanet Direct Imaging Mission Concepts program is all about.

The idea is to blot out the light of a star and zero in on a small planet, right next to it in the sky and 10 billion times fainter (at visible wavelengths) than it. This technology “has come far — and it’s kind of unknown to the world just how far,” Seager says. The plan she is working on calls for a two-part instrument, a space telescope and an “external occulter,” a movable starshade that flies in front of the telescope to block out the starlight and bring the planet into view. Four parts of a prototype starshade are being built and will soon undergo testing. A competing team is refining an alternative approach, called an internal coronagraph, which blots out starlight from inside the telescope. Full reports on both designs are due in January 2015. NASA will then consider spending $1 billion, about $100 million a year, on the winning design.

(That’s no more expensive than other kinds of government functions that routinely get funded without anyone ever noticing: the Congressional Binding and Printing account, to pick just one example. High-profile projects like seeking out other Earths may seem expensive, but they consume a minuscule portion of government spending and deliver an outsize return in education and scientific inspiration.)

Seager is so obsessed with those other Earths, she can almost smell them. In fact, smelling them is precisely what she wants to do. Direct imaging would make it possible to analyze light from the planet’s atmosphere and “sniff” its composition spectroscopically. “What kinds of molecules provide the best signature of life? That’s the other big thing I’m thinking about now,” she says. In a new paper she studies dimethyl sulfide and chloromethane, compounds that result from the breakdown of organic material, as promising targets.

“We’d like to find 500 planets and go, oh my God, 75 percent of them show some weird gas, so we can say, statistically, we believe there is life in our solar neighborhood,” Seager says. Finding swamp gas on an alien world would be a lot less dramatic than hearing radio beeps from E.T., she concedes, but the message would be shocking all the same: We are surrounded by a living universe.

[This article originally appeared in print as "Meet the New Planet Hunters."]