K2 and Gaia Team Up to Confirm 104 New Exoplanets 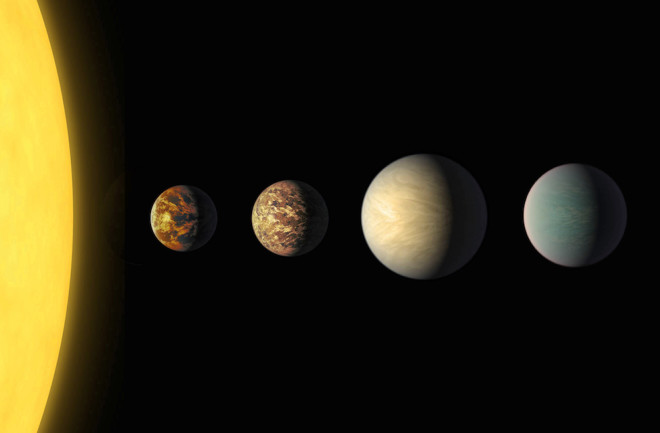 An artist's impression of K2-187, a star with four newly-discovered exoplanets in its orbit. (Credit: NASA/JPL-Caltech/R. Hurt, T. Pyle (IPAC), UTokyo/J. Livingston) K2 might have run out of fuel a few months ago, but astronomers are still using its data to uncover a slew of new worlds. Using stats from ESA’s Gaia mission and K2, an extension of NASA’s Kepler Space Telescope, two recent studies have confirmed the existence of 104 new exoplanets. Their characteristics stretch far and wide, including multi-planet systems, terrestrial compositions and planets that orbit dangerously close to their host stars. These newfound bodies can be used to understand how different types of planets form, and also give next-generation telescopes promising worlds to investigate. Papers describing these findings were recently published in The Astronomical Journal. This new batch of exoplanets was discovered in two consecutive waves. Back in August, researchers from the University of Tokyo announced that they’d confirmed 44 fresh exoplanets by combining data from K2 and Gaia. Before K2 was retired in late October, the space telescope carried out short observing campaigns and searched for the faint dimming that occurs when a planet orbits its host star. Blending this data with stats from Gaia, a space observatory that’s creating a 3D map of one billion nearby stars, they were able to weed out false positives and confirm the novel exoplanets. Using this same method, the University of Tokyo researchers teamed up with the Astrobiology Center of the National Institutes of Natural Sciences to confirm 60 additional exoplanets just three months later.

The research teams were not only able to confirm the existence of 104 new planets, but also learn a bit about them personally. They found two dozen planets that live in multi-planet systems, with Sun-sized star K2-187 harboring four within its orbit alone. There are also 34 planets that likely have rocky compositions and are less than two times the size of Earth, but are probably uninhabitable due to thin or non-existent atmospheres. Most intriguingly, the data shows that seven of these new planets, including one orbiting K2-187, have ultra-short orbital periods — planets so close to their host stars that they circle them in less than 24 hours. Our current formation theory suggests that planets form much farther out in a star’s orbit, leaving astronomers to question how these close-knit systems even exist. But thankfully there’s still plenty of K2 data to sift through, and the continued discovery of these peculiar planets will help shed light on their formations and evolutions. Better yet, a new space telescope is already on the hunt for them. “Although the Kepler Space Telescope has been officially retired by NASA, its successor space telescope, called TESS, has already started collecting data. In just the first month of operations, TESS has already found many new exoplanets, and it will continue to discover many more. We can look forward to many new exciting discoveries in the coming years,” said the papers’ lead author, John Livingston of the University of Tokyo, in a news release. With exoplanets bursting onto the scene faster than ever, and upcoming missions like the James Webb Space Telescope getting ready to investigate them, we’re gearing up yet for another groundbreaking era of discovery.