Just in case you need reminding how nice a place to live Earth is.

When all is said and done, the outer solar system must be a pretty scary place to live. How'd you like to live in a location that has a battle-scarred history like this? 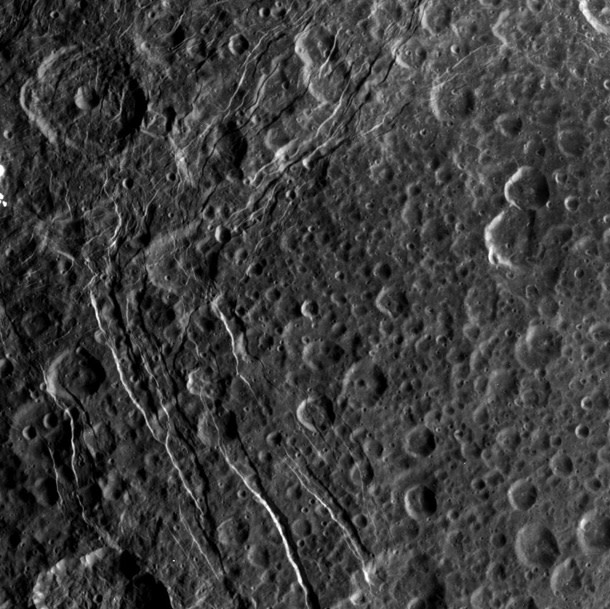 That's Saturn's moon Dione as seen in by the space probe Cassini in a recent pass of the small world. Earlier today (September 4, 2010), Cassini dipped to a height of less than 40,000 km (25,000 miles) above Dione's surface -- that's about the same height as weather satellites above the surface of the Earth! The landscape of Dione is shockingly battered. Craters are everywhere, indicating a fierce history of meteoric bombardment. It is also heavily littered with cliffs and chasms. I learned something incredibly interesting looking up information about the moon: like all moons in the solar system, it's tidally locked with its parent planet, meaning it spins at the same rate it orbits, always showing the same face to Saturn. This is a natural consequence of gravity and isn't terribly surprising. What did surprise me is that the trailing hemisphere of Dione is more heavily cratered than the leading hemisphere! Because of its spin-orbit coupling, Dione always has the same half of its surface pointing in the direction it orbits, and the other half pointing away. Think of it like a car: the front of your car always faces in the direction you travel, and the rear in the other direction (ignore going in reverse). On your car, the front windshield takes the brunt of any debris in your way; insects, gravel, and what-have-you tend to hit the front windshield, not the rear one. But Dione has that backwards! The rear-facing half is more heavily cratered. This has prompted scientists to wonder if Dione actually got spun around by an impact some time in the past. Think about that! Over a long period of time, Dione got hammered by debris. The half facing into its orbit got more battered. Then there was some pretty big impact that hit it at an angle, and that gave the moon a bit of spin. Eventually, tides from Saturn's gravity wore that spin down, and it settled into its current configuration, with the formerly leading hemisphere now facing the other way. That to me is incredible. Even a small moon is a pretty big chunk of material, so imagine an impact -- or even a series of impacts -- so catastrophic that it actually spun the moon up and made it face the other way! And then I learned that an impact big enough to do that to Dione would leave a crater only a few dozen kilometers across. Much, much bigger craters than that can be seen in images. As I write this, the temperature outside is quite lovely, the sky is blue, and I'm yearning to hop on my bike and ride around the hills a bit. Earth is an amazingly beautiful and hospitable planet. Certainly it wasn't always that way, but water and air eroded away the history of our violent past, and have left us with a pretty nice place to live. If you ever doubt that, take a good look at Dione's surface. Things could be a lot, lot worse.