So were there dinosaurs on Noah's Ark? (Don't ask Sarah Palin; her head might explode.) Some creationists do get their knickers in a twist when asked this question, and pull out all sorts of nonsense about dinosaurs being vegetarians before The Fall (but wasn't the Ark built after The Fall?). Now, far be it from me to mock creationists (bwahahahahaha!), but happily, in this case I don't have to. Artist Stephen Geddes will do it for me. He's made an awesome wood sculpture that does the trick pretty well, and it's on display at the Sandra Small Gallery in Covington, Ky... down the road from the creation museum.

Now that's a piece of art I want in my living room. 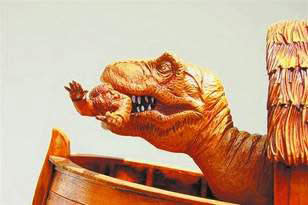 I guess the unicorns were just an appetizer.