Jupiter as seen from a uniquely beautiful perspective 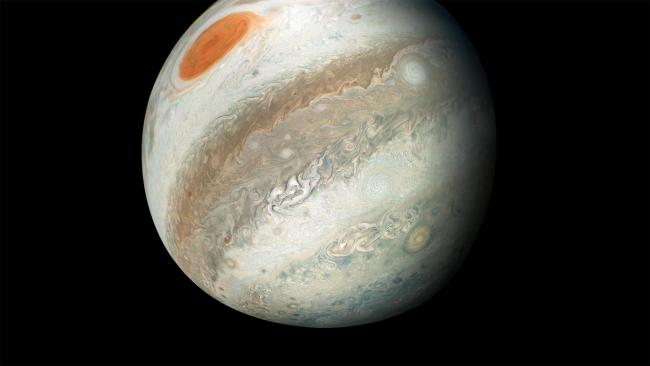 Source: NASA/JPL-Caltech/SwRI/MSSS/Gerald Eichstad/Sean Doran This marvelous view of Jupiter shows the planet from a different perspective than we're used to: from the south. It was acquired by NASA's Juno spacecraft during a close flyby of the giant gaseous planet on April 1. During the encounter, Juno swooped as close as 10,768 miles above the cloud tops of the southern hemisphere. As NASA notes in a release, this color-enhanced view is unique to Juno — we were not able to see the giant planet from this perspective prior to the spacecraft's arrival at Jupiter in July of 2016. With this perspective, Jupiter's Great Red Spot looms particularly large, perhaps misleadingly so. More than 1,300 Earths would fit inside Jupiter itself. As for the red spot, it is about 1.3 times as wide as Earth. NASA scientists actually did not create this image. Credit goes to citizen scientists Gerald Eichstädt and Seán Doran. They started with several separate images from the spacecraft's JunoCam, then they re-projected, blended, and healed them to produce this striking view. You too can try your hand at this: JunoCam's raw images are freely available to the public at www.missionjuno.swri.edu/junocam.