July is the best month to catch sight of our galaxy's Great Rift, including incubators of stars yet to be. 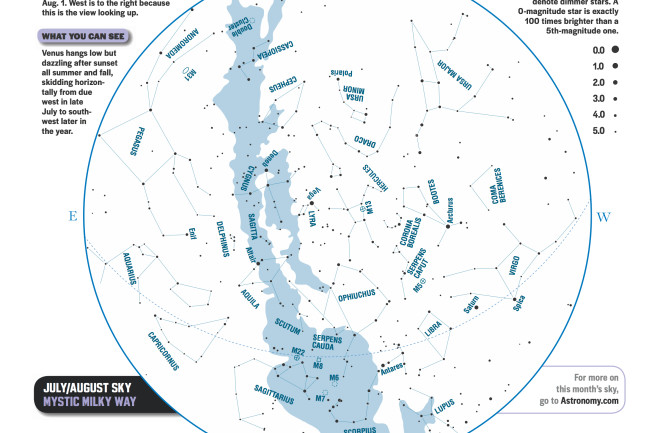 “The Galaxy is nothing else but a mass of innumerable stars planted together in clusters,” wrote Galileo Galilei in 1610, recognizing for the first time that the sun, Earth and other planets are part of a far grander structure. Most of us never get to share Galileo’s epiphany because ubiquitous light pollution easily overwhelms the glow of the Milky Way. But not always: Once or twice a year, suburban skies turn beautifully transparent, often after a storm has cleaned up the air. Or perhaps your summer vacation may take you to true dark-sky country. Either way — seize the moment!

Even a quick glance reveals a lot. The Milky Way appears as a confined band of light because our galaxy is flattened like a pancake, and we lie within it. Looking out through the width of the pancake, you see stars and more stars beyond; looking in other directions, you peer toward the inky depths of intergalactic space.

Observe more carefully, and you’ll notice that the Milky Way seems to have missing chunks, including a long split — called the Great Rift — which is high overhead this month. (Some Incan and Aboriginal Australian cultures perceived such dark gaps as mythological figures, like negative versions of the bright constellations.) These are the shadows of massive, light-obscuring dust clouds. Because of them, much of our galaxy’s 200 billion stars are obscured. But those clouds contain the raw material for the next generation of stars, ensuring that the Milky Way will remain enthralling for billions of years to come.