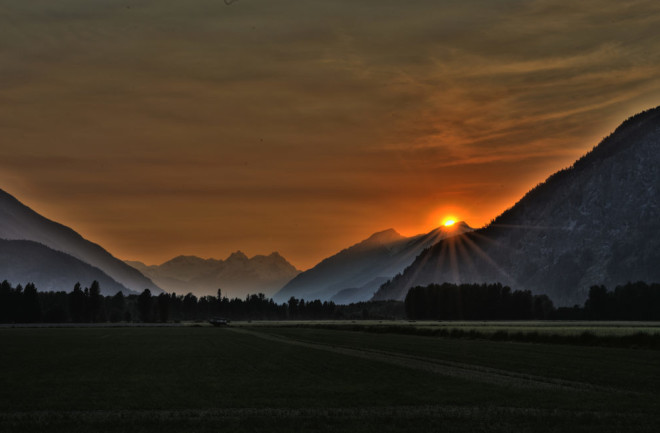 Sun sets in the Upper Lillooet Valley over the Meager Group near Pemberton British Columbia.Dave Steers Photo/Getty Images It's been a busy week or so in the world of volcanoes. Japan's Mount Aso had its largest eruption in recent memory. Canada's Mount Meager might be rumbling to life. And the USGS and Global Volcanism Program released a great animation of 50 years of earthquakes and eruptions.

Mount Aso in Japan had a large explosive eruption last week (10/8), sending ash over 11 kilometers (36,000 feet) upwards. Although eruptions aren't rare at Aso, the scale of this one was larger than usual.

Makoto Saito, director of the Volcanology Division of the Japan Meteorological Agency, speculates that pressure from an accumulation of volcanic gases lead to this blast, as most eruptions from Aso do not produce plumes taller than 10 kilometers. Blocks of volcano junk as large as trucks were spotted near the crater. However, the evidence suggests that this eruption was phreatic—that is, driven by gas and steam, not new magma. Impressive. Mount Aso's ash spread widely over the area around the volcano, creating power outages and train stoppages. Luckily, no one was reported injured or killed by the eruption, but the JMA has Aso on alert level 3 (of 5) and warned people to stay away from the volcano.

Last fall another eruption of Aso generated some impressive pyroclastic flows. These eruptions from Aso also have a strong impact on the local economy that has already seen consequences of recent earthquakes as well as tourists stay away and crops are damaged. False rumors about the activity at Aso have not helped that situation.

Rarely do we discuss Canada here on Eruptions, but the country does have many potentially active volcanoes. One of these is Mount Meager in British Columbia, one of the northern vanguard of the Cascade Range. The last known eruption of Meager was a VEI 5 (about the same size at Mount St. Helens in 1980) eruption that happened around 2,400 years ago. Recently, scientists noticed new fumaroles (gas vents) on the volcano's summit. Measurements of volcanic gases showed elevated carbon dioxide and hydrogen sulfide, but not much sulfur dioxide. Combine that with a lack of earthquakes at the volcano and volcanologists think that Meager is not headed towards an eruption anytime soon. So why did it look like the it was heating up? Ice on the summit has been thinning, making it seem like more activity. Instead, it's probably the same level of activity, we can just see more. However, Meager is the home of Canada's largest known explosive eruption (that previously-mentioned VEI 5). So volcanologists will be watching Meager closely. Meager has also had several large landslides over the past few decades, so that would complicate the situation if earthquakes and eruptions were to increase. Hawaii On the big island of Hawaii, the lava lake in the Halema'uma'u Caldera on Kilauea is coming close to reaching the rim of its crater. This could mean that lava might spill out soon to make a new lava flow field, like what happened in 2015. The surface of the lava lake is ~16 meters (54 feet) from the rim and the surface can be easily seen in the webcams pointed at the lava. Check out the USGS video of spattering at the summit lava lake to see just how vigorous some of the activity is right now. If you really want to feel like you're there, watch the 4K video that shows a flyover of the lava lake and some up-close views of the spattering and simmering in the lava lake. In that video, you really can see the platy nature of the surface of the lake, where the 1200°C lava quickly cools to form a black skin that bends and contorts due to the convection of the lava beneath it.