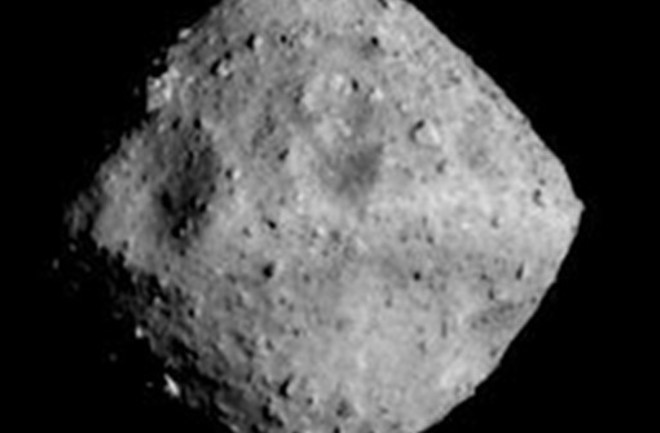 On June 24, Hayabusa-2 snapped a shot of Asteroid 1993 JU3, known as Ryugu, from a distance of just 25 miles (40 kilometers). (Credit: JAXA, University of Tokyo, Kochi University, Rikkyo University, Nagoya University, Chiba Institute of Technology, Meiji University, Aizu University, AIST) Deep-space exploration has been all the rage lately, but the Japanese Aerospace Exploration Agency (JAXA) is homing in on a target closer to home. JAXA’s Hayabusa-2 spacecraft is quickly approaching Ryugu, an asteroid who could provide crucial clues to the formation and evolution of our solar system. The craft set off on its 3.26 billion mile (5.24 billion kilometer) round-trip journey in late 2014, and is now within just 25 miles (40 kilometers) of the asteroid. Once it arrives, it will use an extensive array of instruments to dissect Ryugu’s composition and study its physical properties. Most excitingly, it will bring a small selection of samples back to Earth, thanks to an instrument that first punches a projectile into the asteroid's surface and then collects a portion of the resulting debris.

Ryugu, formally named 1993 JU3, is an estimated 3,020-foot (920-meter) asteroid that orbits between Earth and Mars, and based on spectroscopic data, likely houses a great deal of hydrated material. Researchers believe that these C-type asteroids could've been ancient vehicles that transported molecules throughout the solar system, delivering chemical elements to celestial residents. To test this theory, Hayabusa-2 embarked on a mission to examine Ryugu’s composition. The craft will use its near infrared spectrometer to analyze the abundance of hydrated material, and will also use a thermal infrared imager to record variations in surface temperature and thermal emissions. The data will shed light on its physical properties and help uncover how the asteroid formed and evolved. Hayabusa-2 will also deploy four landers: One, the MASCOT lander, will use an infrared microscope and wide-angle camera to record Ryugu's structural, compositional and surface characteristics, and also document its energy balance and thermal inertia. Remaining are a series of three MINERVA-II landers, each equipped with cameras and temperature sensors, which will travel across Ryugu and record surface temperatures at different times and locations. The most exciting instrument, though, is the sampler mechanism. It will create a 13-foot-(4-meter) wide crater by shooting a projectile into the asteroid’s surface and ejecting pieces small enough to bring back to Earth. By blasting into the exterior and exposing the sub-surface, researchers will be able to study parts of Ryugu that haven’t been exposed to intense heat and radiation. The mission will spend about a year and a half carrying out its research, and is expected to return in 2020. Hayabusa-2 is following in the footsteps of its predecessor, Hayabusa, which became the first mission to collect and deliver asteroid samples to Earth back in 2010. Unlike the planets, whose physical properties and organic materials have been significantly altered since they first formed, asteroids have more or less remained the same since the early years of the solar system. So, studying planetary compositions doesn’t tell us much about the elements that made up our early solar system. Asteroids’ unchanged compositions, on the other hand, allow us to determine the time, place and conditions in which they formed, revealing the specific molecules that were present in our infant solar system. The early years of Earth’s celestial neighborhood are still shrouded in mystery, but by continuing to deploy missions like Hayabusa-2, the puzzling nature of our solar system might begin to fade.