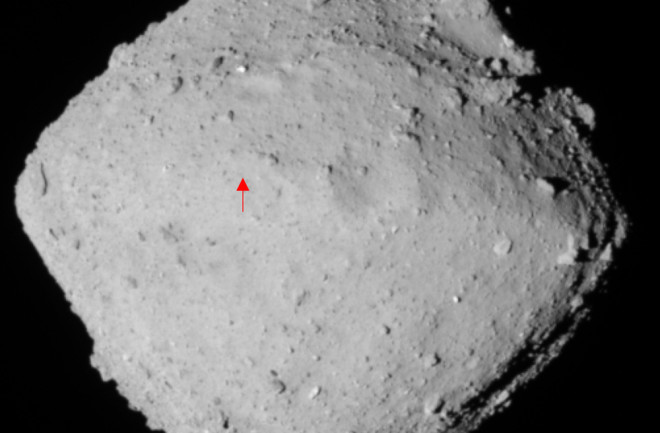 Hayabusa 2 touched down on Ryugu tonight just at the red arrow. (Credit: JAXA) Far from Earth, a tiny spacecraft punched an asteroid tonight. Hayabusa2 swooped close to Ryugu today to collect asteroid dust. The JAXA spacecraft has spent the last day leaving its usual orbit around the asteroid to zoom in close. Tonight, it flew in close enough to touch Ryugu and hopefully steal some space dust before darting away again. It didn't stay long. The touchdown was more of a quick tag, and Hayabusa2 stayed just long enough to fire a tiny bullet into the asteroid’s surface, in order to stir up material. Because Ryugu is so tiny (less than half a mile across), with hardly any gravity, even this small blow should have kicked up enough space dust for Hayabusa2 to collect – hopefully – about 10 grams of material into the horn that hangs from its underside. An hour after the planned maneuver, engineers reported that the command to shoot the projectile had gone off successfully, and that the spacecraft was departing the asteroid as planned and reporting in normally. Hayabusa2 should be back on its normal orbit around Ryugu by tomorrow. Hayabusa 2 isn't finished with its mission yet. Next month, it will shoot a much larger projectile into Ryugu to collect material from below the asteroid's surface. You can check out JAXA’s live feed of tonight's event below. [embed]https://www.youtube.com/embed/qeMwAdquDYM[/embed]