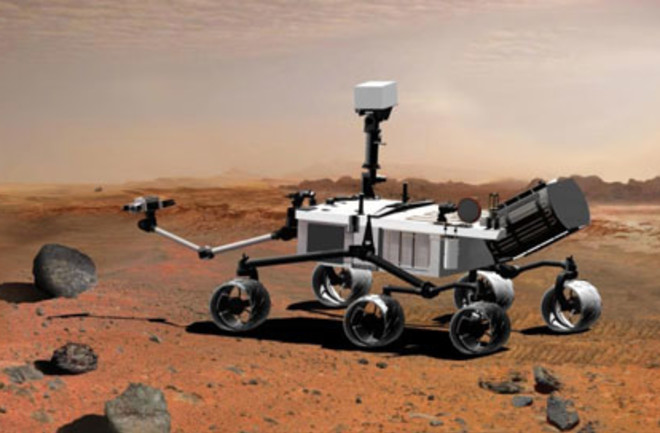 After entertaining the entire planet with the movie Avatar, director James Cameron is now taking his expertise to space--specifically to Mars. He's helping NASA build a 3D camera for its next rover, Curiosity. The space agency announced that Cameron is working with Malin Space Science Systems Inc. of San Diego to develop the camera, which will be the rover's "science-imaging workhorse." The rover, which was previously known as the Mars Science Laboratory, is scheduled for launch in 2011. NASA's Jet Propulsion Laboratory had recently scaled back plans to mount a 3D camera on the rover, as the project was consistently over-budget and behind schedule.

But Cameron lobbied NASA administrator Charles Bolden for inclusion of the 3-D camera during a January meeting, saying a rover with a better set of eyes will help the public connect with the mission [Associated Press]

. Cameron, whose 3D spectacle Avatar earned more than $2 billion at box offices worldwide, had developed a special 3D digital camera system for the film, and felt the space agency could benefit from his expertise. Malin has already delivered two standard cameras to be installed on the rover's main mast. These

cameras, which are set up for high-definition color video, are designed to take images of the Martian surface surrounding Curiosity, as well as of distant objects [Computer World].

But these cameras cannot provide a wide field of view, and they also don't have a zoom; the cameras Cameron is developing will include these features, and will allow researchers to take cinematic video sequences in 3D on the surface of the Mars. However, the 3D cameras aren't guaranteed to be included in the mission.

To make it on the new rover, the cameras will have to be designed, assembled and tested before NASA begins its final testing of the rover early next year [Computer World].

The SUV-sized rover won't only be toting cameras. Curiosity will also carry instruments, environmental sensors, and radiation monitors to investigate the Red Planet's surface. NASA hopes to find out if life ever existed on Mars and if the planet can support human life in the future.

"It's a very ambitious mission. It's a very exciting mission," Cameron said. "(The scientists are) going to answer a lot of really important questions about the previous and potential future habitability of Mars" [AFP].