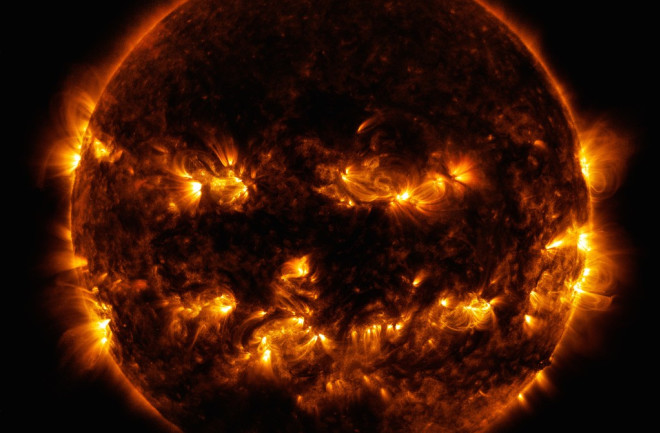 Active regions on the Sun glow brightly in this image from NASA's Solar Dynamics Observatory spacecraft. (Source: NASA/GSFC/SDO) This is no Rorschach test — the Sun really does look like a Jack-O-Lantern in this image captured on October 8th by NASA's orbiting Solar Dynamics Observatory. To be sure, we're looking at the Sun in two particular wavelengths (171 and 193 Angstroms) that have been colorized in Halloween-appropriate gold and yellow. Whether the folks at NASA decided to render this image of the Sun in those two particular wavelengths because they knew it would produce a Halloween-like appearance is your guess as good as mine. Suffice it to say that I'm glad they did it. One thing they had no control over is the location of those bright, active regions — and there's no denying that they take on the appearance of a scary visage. These are regions where the Sun is emitting more light and energy, "markers of an intense and complex set of magnetic fields hovering in the sun’s atmosphere, the corona," according to NASA.

A closeup of an active region on the Sun, as seen by NASA's Solar Dynamics Observatory on Oct. 8, 2014 The image above shows what one of those active regions looks like close up. Those glowing filamentous features trace out areas of strong magnetic field in the Sun's corona. http://youtu.be/yAO9QVrEa-E Last but definitely not least, check out this outstanding video (especially if you are, like me, a child of the Jimi Hendrix generation). As NASA puts it:

This video takes SDO images and applies additional processing to enhance the structures visible. While there is no scientific value to this processing, it does result in a beautiful, new way of looking at the sun. The original frames are in the 171 Angstrom wavelength of extreme ultraviolet. This wavelength shows plasma in the solar atmosphere, called the corona, that is around 600,000 Kelvin. The loops represent plasma held in place by magnetic fields. They are concentrated in "active regions" where the magnetic fields are the strongest. These active regions usually appear in visible light as sunspots. The events in this video represent 24 hours of activity on September 25, 2011.