It's Official: The Supermoon Won't Set Off Earthquakes 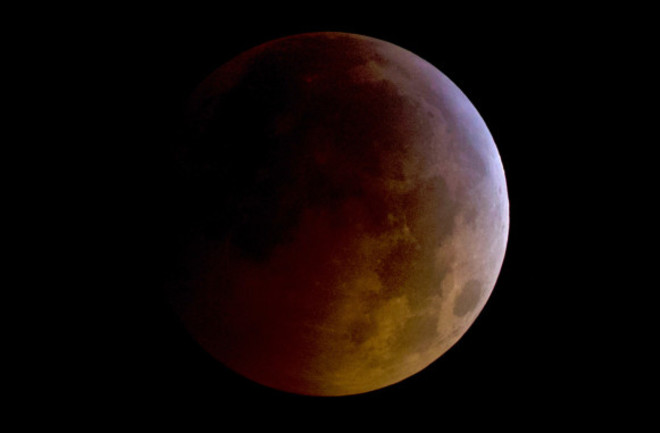 A total lunar eclipse is seen as the full moon is shadowed by the Earth on the arrival of the winter solstice. NASA/Bill Ingalls It's that time of year again! Everyone is clambering over a so-called "supermoon," in which a full moon coincides with the moon's closest approach to Earth. This year, it gets even better as, during this supermoon (or superbloodharvestmoon eclipse) on Sunday, there will also be a lunar eclipse visible. This has all the quacks quacking up a storm about the sorts of destruction that such an alignment will unleash---earthquakes, eruptions, tsunamis! I mean, how could the Earth not respond to such a combination of a full moon, eclipse and perigee! Should you be concerned about this supermoon over the weekend? Well, I think we can look to former Red Sox general manager Lou Gorman for words of wisdom. When asked about the chaos concerning a particularly surly player, his response was, "The sun will rise, the sun will set, and I'll have lunch." That's how we should all view the supermoon. There is little to no evidence that changes in the Earth's distance to the moon has any real effect on the number or size of earthquakes. Humans have the tendency to look for patterns in noisy signals, and this concept of syzygy (started by James Berkland, another in a long line of failed earthquake predictors) has created a litany of quacks trying to say that alignments of everything from the Earth-moon, Earth-sun-moon, Earth-sun-other planets can have a direct effect on earthquakes. So far, none of these self-proclaimed prognosticators have ever published their results---hits and misses---in any reputable, peer-reviewed journal. And without that, they stand with other snake oil vendors that rise and fall across history. Rest assured, earthquakes and eruptions will happen this weekend. However, even if a large one might occur (and one might), it falls within the nearly random distribution of earthquakes and eruptions that occur on Earth. Geologists are studying the idea that Earth tides---stretching of the rocks on Earth from gravitational tugging of the moon and sun, much like ocean tides---might play some small role in tectonic movement. There has been some recent research published in Nature Communications that suggests daily tidal stresses and small earthquakes might correlate with the generation of larger earthquakes, but this evidence is still in its infancy. Research into the Hellenic arc in Greece found a potential link between earthquakes and a combination of solar and lunar tides. In the Cascades, there is limited evidence that tidal forces might influence low frequency earthquakes that occur (and most people don't feel). Meanwhile, some studies show there is no evidence in places like Japan of correlation of earthquakes and Earth tides while others suggest that it takes decades of tidal stresses to potentially trigger large earthquakes (like the 2011 Tohoku earthquake).

Eruptions from Italy's Stromboli appear to intensify around the New and Full Moons ... but the volcano is almost always erupting anyway.

The key to understanding if there is a correlation between tidal forces (from the Earth-moon system) and earthquakes is the orientation of the fault. The gravity tug of the moon will impact faults in different orientations (high angle, low angle, vertical, etc.) to different degrees, so without knowing the orientation both vertically and horizontally on the Earth, predicting the effect of the moon is misguided. For volcanoes, the connection is even more tenuous. Studies at Stromboli in Italy---a volcano that is almost constantly erupting---found that the intensity of the eruption increased during full and new moons. Degassing patterns at Villarrica and Llaima in Chile appear to follow the diurnal tidal cycle as well, but the eruptions of either volcano don't. It even appears that large earthquakes don't play much of a role in causing big eruptions, even when the epicenter of the earthquake is nearby. Really, to feel a strong influence of eruptions, you need to be a tiny moon around a giant planet. One of the holy grails of geology is the ability to predict earthquakes and eruptions to the day and time. However, much like the holy grail, that trophy may not actually be attainable and even if it is, you never know if getting it even slightly wrong might turn you to dust. When the stakes are low, like it is for quacks to try to feed on people's fears of earthquakes and volcanoes, it is easy to make predictions, get them wrong, brush it under the rug and move on. If you are geologic professionals, getting a prediction wrong can, at best, merely tarnish your reputable and, at worst, kill many people. The long and short is that there is still a lot more research that needs to be done to understand what exactly the influence of the moon (or sun) might be on Earth tectonics. However, it is clear that the relationship is complicated. Merely stating that there are a bunch of alignments and boom! we will have a big earthquake is not scientifically supported---it is a pseudoscience to the core. So, go out and enjoy the lunar eclipse this weekend, safe in the knowledge that this especially close moon will not be causing disasters worldwide. The Earth is plenty wondrous without such fear mongering.